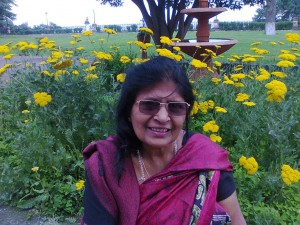 Shefalika Verma is the winner of the Sahitya Akademi Award in 2012 for her autobiographical book in Maithili, Kist-Kist Jeevan.

Shefalika Verma is the first woman writer of Maithili to have bagged the Sahitya Akademi Award. With fifteen publications – poetry, short stories, novels, travelogues, autobiography – to her credit, Shefalika was the image of perfect poise when she appeared for this interview. Excerpts from an hour-long rendezvous with the writer, lover and critic of literature and life:

Firstly, congratulations! How do you feel about receiving the Sahitya Akademi Award? Were you expecting it?

Shefalika Verma: Thank you! Well, I chose writing because it was close to my heart. I have been writing for a very long time now. I started off writing for self-consumption but gradually my works started to get published in magazines like Balak, Chandamama, Kadambini, Rashtra Bhasha Sandesh etc. It was then that the idea was nursed in me by my family that I could write and that I should write more regularly. My father, father-in-law and my husband really put me into the realm of writing and that’s how it all began. This award makes me feel happy that I could make these people in my life proud.

I did not expect it; it was a surprise. For a number of days till the news was formally confirmed by the Akademi, I used to wonder if they have sent me the correct information. I never wrote for grabbing an award. I wrote because it gave vent to what I thought and that cannot be awarded and measured, you know.

What serves as an inspiration for your writings? Do you wish to send messages across to people?

Shefalika Verma: I believe each woman is a writer. I say this because there is so much that she goes through, so much that she experiences that each life chronicles a story in its own right. Perhaps, my life as a woman inspired the writer in me. Kist Kist Jeevan is an autobiographical piece and each incident related therein is very personal. I had to write them. I had to bring it out.

I write to tell a story. Some might appear to have a message and but it is never a conscious effort. I think messages are interpreted and made in the minds of those who read them; one never sets out to give them.

You keep saying that your writings are mostly about your personal experiences and that your family literally cajoled you into this field. Would you wish to elaborate a little on that?

Shefalika Verma: I was married very young into a zamindar family of Bihar. There was this typical conservative atmosphere at home. Luckily, I had been introduced to books very early on in life by my father. They kept me company even at my new home.

I was studying at Patna University and had been married when one of my poems got published. It was a poem that talked about the trials of being a woman. My father-in-law read that and wrote a letter to me, in the form of a response poem. Later, he encouraged me to write more though women in our household were not very free to do everything. It was a lucky situation that education was barred from those notions. One could study, read and write as much as one wanted.

Then there was my husband who picked up this bit of interest in me and literally propelled me to write more. After he was gone, I was in depression for long but slowly I realized that by not picking up the pen, I am essentially doing injustice to him and his encouragement.

So, yes, my family has been very supportive of me and my work. In fact today, my children and my daughters-in-law all give unparalleled support to what I do and what I wish to do. That feels great.

Your writings show women in a very real light – donning hats of competence and at the same time playing roles that are very traditional. Do you think that that’s how women are today or are they only in your works?

Shefalika Verma: I believe that every woman has shades to her. She might be a professional and a mother and a wife and a writer at different points in time but her womanhood is her core. And that part of a woman feels and senses and responds to these going-ons. It is with this woman that I connect. Of course, there are disconnects and issues with woman that rip her apart socially and mentally and on many other fronts but she emerges strong. That is where I think I find them real. And that is how I try to portray them in my works.

You switched over to Maithili though you began as a Hindi writer. What explains that shift?

Shefalika Verma: I am very comfortable in both the languages. But choosing Maithili as my major literary voice was a conscious attempt. My husband, late Shri Lalan Kumar Verma, explained to me how Maithili needs to be nurtured and how there are very few writers there. This struck me. If my works can protect, promote and enrich a language, why not use that in my writings? Also, the atmosphere at home and the mode of communication there was Maithili – culturally as well as linguistically. This choice, therefore, was well informed and shaped.

You have been called “Mahadevi of Maithili”, your works compared to that of Jane Austen’s. How do such parallels affect you?

Shefalika Verma: I remember that once I was sitting at a literary function when Mahadevi Verma walked up to me and lifted my chin. She asked me to write more and appreciated my writings. It was an overwhelming moment. I’ve always admired and loved her. So, when someone compares you to a figure like that, it feels fortunate and very happy. But as far as affecting oneself is concerned, I think it encourages you to write better and write more.