Well-paced and well-written, Indu Sundaresan's Shadow Princess is a historical novel set in the Mughal period, and told through a woman’s perspective. 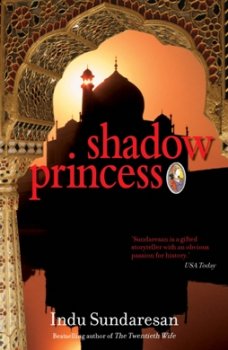 Well-paced and well-written, Indu Sundaresan’s Shadow Princess is a historical novel set in the Mughal period, and told through a woman’s perspective.

Indu Sundaresan’s Shadow Princess is an exciting sequel to the The Twentieth Wife and The Feast of Roses. While The twentieth Wife was about Noor Jahan and The Feast of Roses about Mumtaz Mahal, this book revolves around Princess Jahanara. It is yet another glorious retelling of life in Mughal India during the reign of Emperor Shah Jahan. The story starts from the year 1631 at Burhampur in Deccan India; that is where the Royal camp of Emperor Shah Jahan is. While The Emperor is busy directing the conquest of the Deccan from Burhampur fort in order to gain supremacy in Southern India, his beloved queen, 38 year old Mumtaz Mahal, or the Exalted One dies while giving birth to their 14th child in the 19 years of their marriage. That incident acts as a trigger to the crumbling of the Mughal Empire. With the death of his beloved wife, the Emperor slowly loses interest in everything, while his sons conspire and scheme to gain control of the empire.

Shah Jahan who, is deeply moved after his wife’s death, decides to abdicate his throne just three years into his reign as an emperor. More importantly it is a throne for which he had revolted against his own father and killed his brothers and cousins. This decision leads to an intense power struggle amongst his own sons especially 16 year old Dara Shikoh and 13 year old Aurangzeb. They both see themselves as the worthy successors to the empire. This division finally culminates in the year 1658 when Aurangzeb imprisons his father and kills his three brothers to become the king of the Mughal Dynasty.

Princess Jahanara, who is the eldest daughter of the Emperor, is only 17 year old when she has to take charge of the imperial zenana (harem) after her mother’s death.  She becomes the most important woman in the harem and is forced to remain at the Mughal court all her life, caught up in the intrigues and the power politics of her siblings, sacrificing her own desires for the sake of her father. This book is essentially Princess Jahanara’s story. Jahanara was her father’s favourite child and he always felt that she was the most capable of all his children but belonged to the wrong sex.

The author manages to weave the story so interestingly that it manages to give the reader an in-depth understanding of the golden period of the Mughal era and the life of the royal family. If historical fiction interests you this book would be the right pick. A well-paced, well-written story of the Mughal dynasty through a woman’s perspective, the book’s appeal is not surprising given that her previous titles are also an absolute must read.

If you’re planning to purchase Shadow Princess by Indu Sundaresan, do consider buying it through this Women’s Web affiliate link at Flipkart. We get a small share of the proceeds – every little bit will help us continue bringing you the content you like!

Readers outside India can purchase Shadow Princess through our affiliate link at Amazon.