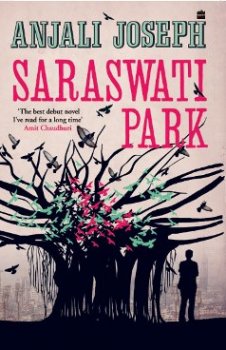 The title alone was enough to draw me to this book. Saraswati, the goddess of knowledge and the Arts in Hindu mythology has always been my favourite deity. In the book, ‘Saraswati Park’ is the name of a housing complex in a suburb somewhere deep in the heart of Mumbai. The story revolves around empty-nesters, Mohan and Laxmi Karekar, whose lives are pretty humdrum and unremarkable. Mohan is a letter writer (one of those quaint jobs which have vanished today) and from his seat under a tarpaulin near the main Post Office he sits and writes letters for those who are illiterate – anything from heartfelt letters to the completion of bureaucratic forms, while Laxmi is a homemaker.

When we first meet Mohan and Laxmi their days are mundane with set routines and nothing much happens to alter it. Both seem frustrated by this mundane existence. An avid reader, Mohan wishes he could do more than just write letters….his secret desire is to write stories worthy of publication and Laxmi, frustrated by how his dreams make him distant from her, turns to the television for company.

I love how Joseph details Laxmi’s frustration with their emotional detachment, as for instance in this excerpt.

“Four of Mohan’s shirts, collected this morning from the ironing boys, lay on the bed. She looked at them in exasperation. It was still there, the mild ring of dirt inside his collars, like a smudged pencil line. It wasn’t his fault; nothing could be done. She had scrubbed at some of them to remove the mark, but it had been the collar, not the stain, that had begun to despair and fray. It was in these things, which didn’t talk or, strictly speaking, have lives, that her days played out: her relationship with the shirts, neatly ironed and folded, was so much more direct that any other interaction these days.”

One day the couple receive a call from Mohan’s sister lamenting the fact that her son Ashish failed his college exams due to poor attendance and would have to attempt them again. Unknown to the family, the poor attendance was due to Ashish’s dalliance with a fellow classmate called Sundar. Since they (Ashish’s parents) are being transferred to another city, would it be possible for Ashish to stay with Mohan and Laxmi for the year?  Mohan and Laxmi readily agree and soon the focus of the story moves to 19-year old Ashish – his life, his friends, his fears, his relationships, his secrets. Despite there being “secrets” in this novel, it has a very calm tone with a quietness and melancholy that emanates like faint perfume from every page, making it linger with the reader long after the last page has been read and the book closed.

For those of you who grew up in ‘Bombay’ (and in the mid ’80’s), this novel will be especially precious because of the author’s observations and descriptions of this wonderful city I call home. It is also a book about family love and obligations, about growing old together, about love and loss and goodbyes. All these may seem heavy but they are handled deftly and delicately by Ms.Joseph and there is none of that masala or twists and turns that we have come to associate with other Bombay novels – just an intimate journey into the lives of everyday people who happen to live rather quietly in this bustling metropolis. As much as I liked the other Bombay novels mentioned earlier, none of those plots seemed real to me. My Bombay was like the Bombay one finds in Saraswati Park – of trees and birds, of ordinary people, school, college, the market, weddings, neighbours, old books, corner shops and so on. This novel is a celebration of everyday life and seeing some beauty in it.

I’d like to close with a beautifully written passage that appears when Ashish is getting ready to take leave of his city. This passage resonated so much with me because, I, too, had to bid Bombay farewell around the same age as Ashish did and it hurt so much.

“…he felt melancholic;  finally he understood what life was like, the meetings and partings it entailed.  It was a thought that only made him more attached to his life and the people in it.

From his window seat he looked with hungry eyes at the dirty worlds next to the tracks:  the brigtly painted shacks, the grubby faced children, the ugly concrete tower blocks, the smells…

It was his city, his world; it might be imperfect but it was home. Yet he knew that only his imminent departure nurtured this sudden passion for Bombay which sometimes was a neutral environment in which he existed, and at other moments felt like a trap he’d never escape.”

If you’re planning to purchase Saraswati Park, by Anjali Joseph, do consider buying it through the Women’s Web affiliate link at Flipkart. We get a small share of the proceeds – every little bit will help us continue bringing you the content you like!

Readers outside India can purchase Saraswati Park through our affiliate link at Amazon.