Salt: A Shot of Adrenalin 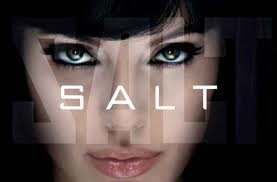 Angelina Jolie. Twists and turns. Spy thriller. Salt is no game changer, but this one-woman show still delivers the thrills.

Phillip Noyce’s Salt starring Angelina Jolie in the title role of Evelyn Salt is a power-packed movie to satisfy your thirst for action thrillers. The story revolves around an undercover CIA operative whose already dangerous double-life gets even more treacherous, when she is accused of being a Russian agent on a mission to destroy America.

Though Salt initially denies the charges, an element of mystery is added when she suddenly goes on the run, contributing to the law enforcers’ (and our) worst suspicions. On the other hand, there are some pieces which do not exactly fall into place in this jig-saw puzzle, thereby adding to the confusion.

‘Who Is Salt?’ the movie’s tagline asks and the storyline plays a guessing game, keeping us at the edge of our seats.

There are intriguing twists and turns, and the suspense is well-maintained till the climax when all questions are answered. Playing a stylish and tough, no-nonsense woman who is willing to fight and bull-doze her way through, is nothing new to Jolie and she slips into this role with ease, looking superbly fit, as always.

She receives ample support from the rest of the cast which includes notably, August Diehl as Salt’s arachnologist husband, Liev Schreiber as her friend and colleague Ted Winter and Chiwetel Ejiofer as Peabody the officer in hot pursuit of Salt.

The screenplay is fast and well-paced, complimented by a racy and upbeat soundtrack. Energetic chases, well-executed stunt sequences and explosive gunfights are strewn around generously and here Jolie’s dynamism and vigour comes to the fore.

Of course, the basic story itself is only a variation of the innumerable espionage movies that Hollywood has produced so far. Don’t probe too deeply or reason too much and don’t expect anything radically different or amazingly innovative here. The focus seems to have been on developing a fun, entertaining and exciting flick, while not dwelling too much on moral dilemmas, rational loopholes or practical arguments. On that count, Salt delivers. It is a strong, all-out one-woman show which Jolie pulls off effectively, with her signature flair and panache.