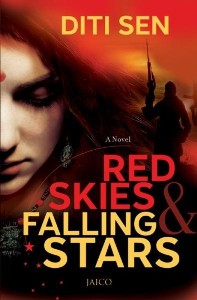 Say ‘Maoist’ and everyone sits up in alarm. Unlike the Naxalites of the 70’s they seem to be here to stay and, again unlike the Naxalites, they are not an urban phenomenon even though the terms ‘Naxalite’ and ‘Maoist’ are used interchangeably. Diti Sen’s Red Skies & Falling Stars cleverly interlinks two dramatic periods in West Bengal’s political landscape through the lives of a family disrupted by encounters with the red brigade.

This is the story of an affluent business family where the daughters go to convent school, lead happy lives and holiday in the idyllic regions of Ghatshila. Childhood is about sunsets, herons flying in the skies, or birds calling in the gardens. There are rivers in Ghatshila and presents and excitement in Calcutta – and readers may be forgiven for thinking that there is something autobiographical about it all. To Rumi, the youngest of the daughters, who tells the story, it seems like a dream time. Lost in their happy lives they are unaware of the consequences of certain events in a place called Naxalbari until the eldest of the girls, Amu, goes to college. There, suddenly faced with a whole new world of young men, Amu loses her heart to a Byronic intellectual who draws her into the Naxalite movement and divides her from her family.

Sen outlines the gradually escalating violence, first in Calcutta, where people are afraid to go out at night, then in rural Ghatshila where there is an increasing sense of aggression and even the girls are stopped by the police. Ultimately violence becomes a flood that washes Rumi’s happy family life away in its wake.

This is violence seen from the point of view of the women in the family, the mothers, the sisters and the aunts, which very few books have attempted to cover, the most notable exception being Mahasweta Devi in Hazaar Chourasir Ma. However, Amu’s character and that of her sister Shiela do ask for more rounding out. And occasionally Rumi’s knowledge of events seems a little too prescient.

Ishaan, Rumi’s nephew who has grown up in Canada, comes briefly into the narrative. He is curious about the Naxalites and their history in the context of current Maoism. Ishaan’s story brings the book up to date with current politics, but Sen seems to be more comfortable writing in Rumi’s skin and does not really switch style between the voices of Ishaan and that of his aunt.

Even though times change, certain things do not is the book’s message. With the passing of time Ghatshila’s beauty has disappeared, the landscape is occupied by concrete box homes and the bubbling river has stagnated. The graceful Santhal women are draped in garish nylon saris and are hostile. Sen’s descriptions again bring out the sense of time passing. However, one could have hoped for a few less liberally dotted Bengali words for birds and flowers like bok mama, chamchikis and ghughu pakhi which are made irrelevant by the fact that the names are also translated for the reader’s convenience.

In the end Sen implies, time has a habit of repeating old tragedies. And the consequences of political actions are hard to escape.

If you’re planning to purchase Diti Sen’s Red Skies & Falling Stars do consider buying it through this Women’s Web affiliate link at Flipkart. We get a small share of the proceeds – every little bit will help us continue bringing you the content you like!