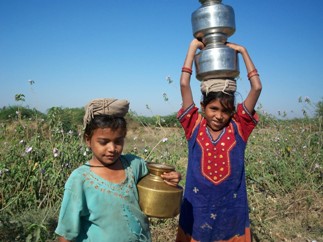 Women’s activism in India can eliminate gender discrimination only through work done at the institutional level, says Praveena Sridhar.

Indian society has fought gender discrimination actively for over 100 years but ever so often we start and stop with raising a question- something like, “What is to be done?” Along with the discourse at various forums, conferences and seminars, academicians and scholars publish volumes of papers on the subject, out of which some studies make the national headline.

It is beyond doubt that we have had a splendid run in making gender issues get heard all over. Now for the progress report; one needs to ask if all this is really changing the situations that women find themselves in today? I’d say that it is about time we gave a fresh look at what forms of intervention can help women get their rightful place in the society and which they should get naturally – not out of someone’s “concern” for women or for “empowering” them! I’d like to share some experiences from my work in the development sector in India and more specifically in environment and water related fields. My argument is that there is a dire need to re examine the efficiency of the interventions that we make in conserving and ensuring women’ interests.

Women’s activism needs to include women

For instance, in areas (villages or urban settlements) which face acute drinking water crisis, the government as well as the non government agencies often start with holding a meeting with the residents before they undertake any project to address the problem . The stated goals of such projects always include women’s health, reducing the drudgery of spending endless hours fetching water and some crafty statements like these. Needless to say this meeting is almost always populated by men. This would have been absolutely fine if the men were known to have taken active part in running the household and washed clothes, done the dishes, fetched water etc. The fact is none of these are done by men and consequently they have not the faintest idea of what their family’s water consumption is like.

This would have been absolutely fine if the men were known to have taken active part in running the household and washed clothes, done the dishes, fetched water etc. The fact is none of these are done by men and consequently they have not the faintest idea of what their family’s water consumption is like.

Now, try making a decision on the total water demand of an area and average requirement of a family based on the men’s estimates. The fate of a project based on such a data is any body’s guess! Many from the sector would counter this observation by claiming that in such meetings it is ensured that women participate. While this may be true in some cases, it does not in any way reflect in the project’s design and planning considerations.

This rather small instance points to a much deeper problem. Water related issues are not exclusive or separate from the basic problems of income, livelihood, nutrition and sanitation. On all these counts data suggests that women fare much worse than the men. At the same time, it is important not to reduce this as a problem specific to rural areas or to women from poor households. Women in urban areas do not fare any better. Although, they do come across as literate and many of them also have a job but this does not mean that all is good. Gender inequality in urban areas often is not clearly visible but sure is present.

Women’s representation in civic administration of most Indian cities is poor. Women in senior management in companies, in trade and industry associations as well as in elected bodies are also few in number. Poor representation in all these areas ultimately leads to a lack of equal concern for men and women and therefore a lopsided welfare plan administered by the cities.

For instance, the city utility boards which provide water and sanitation services to the households do not realize how important and necessary it is for them to have a gender focus. Making sanitation available to women is doubly important for the health of the household on the whole. Having latrines in their homes make a world of a difference to the women by doing away with the shame associated with going in the open for their chores, eliminating the threat of molestation and ensuring cleanliness and hygiene. These have a cumulative effect of making the woman more available for her family and reduce the pain of living in appalling human conditions. These priorities do not exist in the government departments and which should be a great concern today!

…the city utility boards which provide water and sanitation services to the households do not realize how important and necessary it is for them to have a gender focus. Making sanitation available to women is doubly important for the health of the household on the whole.

A positive for women: no gender discrimination in equal property rights

Alleviating this situation, in which most of the women are, needs interventions which start at the systemic level. While awareness and rallies sure have their role to play, I argue that these can hardly make any firm contribution towards improvement. Intervening at the policy level, regulatory level and pressing for institutional reforms produce lasting changes which in course of time alter public behaviour.

A case in point is the landmark amendment made in 2005 to the Hindu Succession Act of 1956 in India. Leading economist Bina Agarwal (who also played a key role in formulation of this amendment) writes, “After 50 years, the Government finally addressed some persisting gender inequalities in the 1956 Hindu Succession Act (1956 HAS), which itself was path-breaking. The 2005 Act covers inequalities on several fronts: agricultural land; Mitakshara joint family property; parental dwelling house; and certain widow’s rights”.

Further, she adds, “In Delhi, Haryana, Himachal Pradesh, Punjab, Jammu and Kashmir, and Uttar Pradesh, the tenurial laws specify inheritance rules that are highly gender unequal. Here, primacy is given to male lineal descendants in the male line of descent and women come very low in the order of heirs. Also, women get only a limited estate, and lose the land on remarriage. Moreover, in U.P. and Delhi, a “tenant” is defined so broadly that these inequalities effectively covered all agricultural land. U.P. alone has 1/6 of India’s population. This clause thus negatively affected innumerable women farmers.

The second significant change – making all daughters (including married ones) coparceners in joint family property – is also of great importance for women, both economically and symbolically. Economically, it can enhance women’s security, by giving them birthrights in property that cannot be willed away by men. In a male-biased society where wills often disinherit women, this is a substantial gain.”

This is a lesser known case of policy reform which makes a dent in gender discrimination that has not been made by years of public activism.

Another case in point is making gender determination tests in pregnancy a criminal offense. No amount of moral appeal could bring this practice to a stop. But a legal recourse matched with public awareness did bring about a change in the situation, except in a few states.

Finally, I am of the opinion that the myriad forms of gender discrimination that exist in the society today needs to be clearly understood and careful strategies must be developed to address them through policy and institutional reforms which could be slower but tend to deliver a lasting impact.

Women must understand that they have to move beyond the preoccupation with one’s own personal life and issues and instead seek recourse to address these ills through a larger involvement with civil society. Someone has to do the dirty work…it might just be our generation which fixes things for the rest!

About The Author: Praveena Sridhar is an Environmental engineer and a graduate of Stanford University and Nanyang Technical University. She has been working in the Gulf Of Mannar (Tamil Nadu) region since 2007 on education and healthcare related ideas. Alongside, she is a consultant with Arghyam Trust. She hosts a blog where she writes on Environment and other issues at www.detailtalk.org