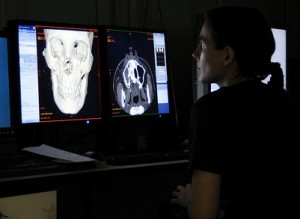 Are doctors nowadays ordering too many scans and should we be worried about the exposure to radiation from frequent scans?

Medical science has advanced significantly in the last decade. Sophisticated radiology tests such as CT scans, ultrasounds, mammography and MRIs have drastically changed the way patients are diagnosed and treated.

Not to take away the immense benefits that scanning technology has brought to us, but is there a downside to this? Are frequent scans truly necessary, and more importantly, is it safe to undergo multiple scans?

Kiran Kusumba, a 39 year old IT professional, went to a renowned doctor in Hyderabad when she developed upper back pain. “He prescribed a multitude of tests – blood tests, bone density tests, scans and what not. He did not even want to look at my old reports and wanted to get everything done from scratch. His refusal to even discuss the problem without the new test results made me wonder whether he was really interested in treating me,” complains Kiran.

…are doctors unnecessarily prescribing scans and should we do away with them?

Dr. B. Ekbal, retired professor of Neurology, reminds that scanning has significantly brought down mortality rates by diagnosing diseases early. “But unfortunately, the prevalence of scanning has also led to the development of a kickback culture in the medical community. Many hospitals outsource scanning and these laboratories need a minimum number of scans every month for profitable operations. Doctors also get their percentage cut if they refer patients to a particular lab. This has led to rising healthcare costs as well,” says Dr. Ekbal.

So are doctors unnecessarily prescribing scans and should we do away with them? “Of course not,” says Dr. Ekbal. “Scanning is a boon for medical science, make no mistake. Granted that it can be expensive, but the results make diagnosis easy and accurate. In fact I would say that new generation doctors are becoming increasingly reliant on scanning technology for diagnosis,” he adds.

But surely, isn’t undergoing too many scans detrimental to health because of the risk of increased exposure to radiation from frequent scans?

“Scanning technology that is available today is extremely sophisticated. You have no reason to worry. The radiation levels in modern equipment are negligible. The benefits of scanning far outweigh whatever minimal risks that are posed by radiation,” explains Dr. Ekbal.

Women are usually worried about whether it is safe to undergo scanning during pregnancy. “During my pregnancy, my family was uncomfortable about the number of scans I had to undergo. So I spoke to my gynaecologist and she assured me that there is no radiation whatsoever in ultrasound scanning,” says Hyderabad based Vandana Vellore.

Women are usually worried about whether it is safe to undergo scanning during pregnancy.

Ultrasound scans have been in use for more than 40 years, and so far no studies have proven any harmful effects for the baby. In fact ultrasound scans use just sound waves and does not involve radiation at all.

But what about mammograms? A mammogram is an X-ray image of the breast and it does involve some amounts of radiation. Mammograms are used for screening and diagnosis of breast cancer. According to a paper published by the UK National Radiological Protection Board, the additional risk of a person developing side effects from X-ray procedures is negligible, minimal or very low. Screening mammograms use only very low doses of radiation which have as yet not been proven to cause harmful effects. Again, the benefit of early diagnosis and treatment of breast cancer far outweighs the risk. The earlier breast cancer is detected, the higher the chances of successful treatment and recovery.

According to the Indian Council of Medical Research, breast cancer is now one of the leading causes of cancer-related mortality among Indian women. Experts are dismissive about radiation risks during routine mammograms. There is no reason to avoid or delay a mammogram because you are concerned about the side-effects of radiation.

Questions to ask your doctor about radiation exposure before a scan

If you are unsure about the necessity of a scan for diagnosis, don’t hesitate to discuss your concerns with your doctor. Be open and honest about your fears.

Here are some questions that you may want to ask:

– Is it necessary to undergo this scan now? What happens if I choose not to?
– What will this scan tell you that other diagnostic tests cannot? Can you recommend an alternative that doesn’t involve radiation?
– What are the possible side effects of exposure to radiation during scanning? How will it affect my health, now and in the future?
– Is a low-dose scan sufficient? Will you adjust the scan settings based on my size?

If you have undergone a similar scan recently, there is usually no need to undergo another scan from a second hospital. The previous results can be shared electronically. After every scan, make sure that you get the copies of your results. Also, if you are breast-feeding or pregnant, make sure that you mention that to your doctor.

If you still don’t feel confident, you may also get a second opinion.

If you still don’t feel confident, you may also get a second opinion. When Revati Basavaraj, a 34 year Commercial Manager, consulted her orthopaedic doctor in Hyderabad for a minor back pain, he advised her to get an MRI. She decided to take a second opinion. “The second doctor prescribed only medicines and the back pain disappeared in 2 visits. He was also surprised when I told him that I was initially advised to get an MRI,” says Revati.

It is good to be cautious, but remember that there is no need to get unduly worried about radiation from scans. As all experts agree, the benefits to women’s health far outweigh the minimal potential risks.

Nisha Salim is a self-employed writer and a social media junkie.

Health Tips For Working During Pregnancy