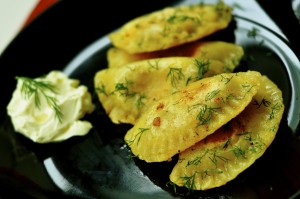 Up Close And Personal With Polish Dumplings

Polish your cooking skills in your Indian kitchen with a vegetarian version of the popular Polish dumplings, pierogi!

I peel the brown skinned spuds, while taking a moment to put up some water to boil. A hand pinches a dash of salt and throws it into the simmering liquid while the other plucks a packet of cheddar cheese from the fridge. “Plop”, jump the potatoes into boiling water. Standing on tiptoe I try to reach the flour jar and steal a glance at the window. Catching the morning light is imperative if I want to photograph my dish. The double whammy of cooking something for the first time and racing against the sun is not funny.

“Bub Bub Bub Bub,” comforts the potatoes as the scalding water gnaws at their starchy self-esteem.

If you sidle up to me right this moment, I’ll tell you that I am making pierogi for lunch – simply put, Polish dumplings. These semi circular pockets of dough are stuffed with either sweet or savoury fillings. For my brief stay in Poland, I only sampled the savoury kind with fillings made of potato, cheese, sauerkraut, meat, mushroom and spinach. But if you nurse a sweet tooth, Polish cuisine offers you pierogi with fresh fruit fillings of strawberry, blueberry or apples that work as excellent dessert options.

The kind I am making in my kitchen today is a vegetarian variant called ruskie pierogi, with smooth potato-cheese-mushroom filling, one that had warmed my gut on a cold Easter evening in Warsaw. Ten dainty crescents appeared in the very skillet they had been sizzling in, slathered in bacon fat (I use butter for the vegetarian version) and garnished with caramelized onions. “Dunk them in some sour cream first”, the waitress at the pierogarnia had insisted.

…tasting pierogi is akin to indulging your palate in a luxurious spa.

Trust me when I say – tasting pierogi is akin to indulging your palate in a luxurious spa. As your mouth works through the dish, for a few fleeting seconds your delight will escape terra firma, hang in a state of relaxed ennui, then sink into a fathomless comfort cocoon, hard to get out from. For heightened pleasure, hit the sack for an intensive power nap after this Zen-like encounter.

And to make my afternoon siesta worthwhile, I am sweating it out in the kitchen today because making pierogi from scratch can be quite hands-on and time consuming. However, the good news is pierogi can be made in batches of 30 or more at one go and stored up to a period of 6 weeks. If you intend to freeze them, parboil the dumplings, cool them and store in airtight containers lined with plastic sheets.

Best of both worlds: economical, yet delicious pierogi

Traditionally a staple of Polish peasants – that climbed the social ladder and popularity charts to become the country’s national food – pierogi do not call for ostentatious ingredients for obvious reasons. Meaning, the potatoes, mushrooms, onions and cheese for my ruskie pierogi filling came from the local grocer, didn’t burn a hole in my pocket and will deliver on taste.

Making pierogi involves three broad steps. Step one is preparing the dough and the filling; step two involves rolling the dough into sheets, cutting out dumpling wrappers and stuffing them; and finally step three takes us to cooking the dumplings by boiling them in water, baking and/or sautéing in butter. Though traditionally pierogi dough is prepared by mixing just flour and warm water, I am adding an egg and sour cream, to make it lighter and flavourful. You can also sneak some of your mashed potato filling into the dough for extra softness.

Some cooks knead the dough with milk instead of water, while Lithuanian housewives bank on a secret ingredient for their savoury pierogi i.e onion juice. If you’re up for orange, green or pink pierogi, just replace some of the water with carrot, spinach or beetroot juice.

My dough is kneaded and will rest in the fridge, while I fold the cheese into my mashed potato filling. Freezing the dough will help me roll the sheets really thin and if you own a heavy rolling pin, the job gets even easier.

After you roll the dough into a thin sheet, try to cut out as many circles (with a cookie cutter or a drinking glass in my case), as possible to minimize rolling the scrap dough time and again as it gets tougher. Just as the pierogi skin needs to be soft and malleable, the filling needs to be firm, so when the dough is sealed around it, it doesn’t collapse. For potato-based fillings, I choose potatoes that have as little water in them as possible such as Russets.

I have my last six pierogi in a pot of boiling water, and the rest browning nicely in butter. A blob of sour cream with a sprig of dill on top waits by the side of the plate. The sun hasn’t climbed too high; a perfect shot might just make the day.

“Ruskie pierogi” translates to “Ruthenian” pierogi in English. They are not Russian, as per a common misconception. Russian dumplings are called “pelmeni” and they only come with savoury fillings, that aren’t precooked. Ruskie pierogi originates from a pre-war region of Poland called Red Ruthenia, a part of which is within the territory of Ukraine today.

Water for kneading the dough

10 Shitake mushrooms (can be replaced with button mushrooms)

To make the dough, mix flour, egg, sour cream, butter and a pinch of salt together in a bowl with your hands. Carefully add warm water to this mixture and work the dough till everything comes together as a plain smooth mound. If the dough is too sticky, add more flour, if it’s dry, add water.

Once the dough is ready, cover it in cling film and let it rest for 30 minutes in the fridge.

Meanwhile work on the filling: boil the potatoes until soft, drain them and dry on a kitchen towel. Add the cheddar, a pinch of salt and pepper to the potatoes. Mash everything together into a fine paste.

Heat a tablespoon of butter in a skillet and lightly sauté diced onion and mushrooms. Season it with salt and pepper. Once cooled down, add it to the potato-cheddar mixture.

Divide the dough into 3 equal parts with a knife. Take one part and roll it into a thin sheet using your rolling pin. Flour the surface to avoid the dough from sticking.

Use a cookie cutter or a 3-inch (diameter) drinking glass, to cut out as many discs as the sheet will allow.

Scoop a teaspoon of the filling and place it at the centre of the disc. Fold it over in a semicircle, enclosing the filling. Pinch the ends together with the tip of your fingers and then press with the tines of a fork, along the seam for design. Continue this process with the rest.

Boil water in a large saucepan and add a tablespoon of salt. Drop no more than 6 pierogi into the boiling water at a time. In about 5-7minutes, the dumplings float to the surface. Pick them out with a slotted spoon and drop another batch.

These boiled pierogi are perfect for eating as it is with sour cream. Alternately, pan-fry them in a little butter. If you wish to be elaborate, sweat some diced bacon in butter and caramelize sliced onions. Then sauté the dumplings in the bacon fat. Sprinkle some chopped scallions on top for colour and dig in.

In Pursuit Of Epicurean Inspiration

5 Ways To Spend Less Time In The Kitchen