Set in a Punjab 'choking on gun-powder', Reema Moudgil's Perfect Eight places passion and enchantment against the backdrop of displacement. 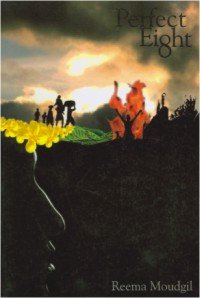 Set in a Punjab ‘choking on gun-powder’, Reema Moudgil’s Perfect Eight places passion and enchantment against the backdrop of displacement.

What first catches your attention is the language. Descriptions like ‘a bungalow’s white shoulders wrapped around in a bougainvillea shawl’ and ‘a slow river like the notes of a tourist’s harmonica’, draw you in to Reema Moudgil’s debut novel, Perfect Eight. Then there is the story – of Ira’s fascination with the handsome Samir which is drawn out through the book as the two meet and grow older. Will he, won’t he is the question that teases the reader who finds herself slowly drawn into the dark awkward skin of the narrator, Ira.

Ira’s mother is a ‘rifuji’ from the Partition, rescued from a dog kennel in Lahore after her home goes up in flames and sent across the country to Kanpur where she is reluctantly brought up by her father’s friend. Refugees, she is told are bad luck and she should thank her lucky stars for whatever kindness she gets. Growing accustomed to unhappiness being a way of life, Ira’s mother realises that “life never asked for one’s opinions. It did not recognise a woman’s desperate love for a house with sunlit, flower-filled balconies.” And she passes this  philosophy on to her daughter. Ira learns to “smell grief before it struck”.

Ira sees herself as an outsider divorced from happiness, determined to spoil life for others through her cutting remarks; until she comes to Annaville, the magic plantation where her mother’s friend Anna lives. “The days at Annaville bubbled away like a clear stream, gently washing over me. The frightened little animal crouching under my skin began to breathe in tandem with Annaville’s becalming heartbeat.” It is at Annaville that meets and begins to fall in love with Anna’s son Samir.

The background to this passion and enchantment is the theme of communal disharmony. Ira and her parents are Hindus living in a Punjab which is “choking on gun-powder”.  Bhindranwale is trying to persuade the Sikhs that they do not belong together with Hindus and riots stir the place into ferment. Ira’s father Papu however holds firm to his belief that “Punjabis are not Hindus or Sikhs. They are Punjabis. You can kill them but not their love for their fields, their temples, their gurdwaras and each other.”

Ira herself, stranded at one of Samir’s parties just after Babri Masjid finds herself telling an anti-Muslim guest that she is a Hindu who does not belong to India. “My mother was not born in your India, but what you now call Pakistan. The majority in Pakistan one day claimed her country, killed her parents and threw her at what remained of India.”

However, communal disharmony is the just the undercurrent. The main plot is Ira’s love for Samir and her marriage to Gautam who seems to be understanding but, for reasons known only to Moudgil, loses interest in Ira. Ira’s marriage is, in fact the weakest part of the book simply because Gautam is not fleshed out as a character (though his infatuation for his bureau chief Sarita in a way mirrors Ira’s hopeless love for Samir).

Ira’s character too seems to veer between awkwardness and confidence so that the reader is almost as confused as she is. But characterisation is not really important here. What is real about the book is the language and the sexual tension that it captures.

After years of love and loss, Ira reaches some kind of closure, though not the kind that most sentimental readers may be expecting.

If you’re planning to purchase Perfect Eight, by Reema Moudgil, do consider buying it through this Women’s Web affiliate link at Flipkart. We get a small share of the proceeds – every little bit will help us continue bringing you the content you like!

Readers outside India can purchase Perfect Eight through our affiliate link at Amazon.