The world of extremely gifted children differs quite drastically from those of "normal" kids. Two Indian moms talk to us about parenting talented sportspersons. 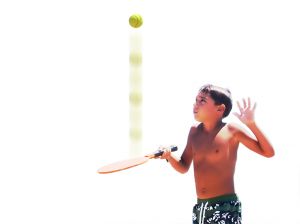 The world of extremely gifted children differs quite drastically from those of “normal” kids. Two Indian moms talk to us about parenting talented sportspersons.

Amy Chua’s tiger-parenting methods have triggered raging debates about the pitfalls of pushing kids and the value of training, dedication and competition. Two Indian moms whose children have pursued competitive sports share their tips for managing the challenges that come up with gifted children.

Sheela Kamath, a Special Educator and Counsellor in Bangalore is mother to 18 year old Meghana who has been a state-level swimming champion. “We signed her up for swimming classes at age 6, only with the intention of easing her chronic colds and sleep disorder, where she would sleep in the evening and awaken in the middle of the night”, she says. Meghana’s coach spotted her aptitude and soon she was training for competitive swimming. From the ages of 10 to 15, she participated in several inter-school and interstate tournaments, winning medals and trophies galore.

Vani, a former bank employee in Bangalore is mother to two children. Her 14 year old son Vishnu has been a state-level table-tennis champion since the age of 10. Initially, his parents signed him up for table tennis only as a required sports activity. She says, “We are not a sporting family, and so it came as a surprise when he turned out to be good.”

Sheela says that Meghana did experience a lot of stress, which she did not express at the time. “She had to eat a lot of nutritious food, especially protein drinks. It created tensions with her general lack of interest in eating”, she adds. Meghana would sometimes get very upset when a competitor won a race by 0.1 second; she would even develop a slight fever.

Both Meghana’s and Vishnu’s schools were supportive. Missing classes or tests for attending sporting tournaments has never been a problem.

“Meghana’s health certainly improved, and she would sleep at a more appropriate time in the late evenings, thanks to swimming,” says Sheela. The competition and accolades boosted her confidence and self-esteem. Meghana looks back on her career with satisfaction; her experience has instilled many values.

Besides the recognition, there are perks such as getting college admission in the Sports quota. “A huge plus is the concentration that is an essential part of sports like table tennis. The focus carries over to other areas, such as academics etc,” says Vani.

“I don’t pay any attention to the opinions of others about his training or attitude. I feel all five fingers on our hands are different,” says Vani. Recognizing every child’s individual strength is more important than moulding every child into a competing clone of the next. Vani does not unduly celebrate his wins nor mourn his losses. She emphasizes, “The interest and motivation come from him. I tell him that if he wants to quit, he can.”

Sheela has been at the receiving end of criticism and accusations about pushing Meghana. “People exclaimed that swimming would ruin her health. We clarified our doubts with the coach”, she says.

“Yes, Vishnu has gone through phases of waning interest, especially during a losing streak,” states Vani. She feels her composure helped him over it.

Meghana took a while to enjoy swimming initially. Her interest peaked by seventh grade, when she switched School Boards to devote more time and attention to swimming. After the ninth grade, her interest dropped, and she quit after tenth grade. Sheela feels periodic stages of disinterest are normal. “We stayed firm about her continuing, but ensured we talked about it often”, she says. Sometimes, a change in coach can help a discouraged or bored child.

Vani has seen a few Indian moms egg on their children to take revenge on those they lose to and come down heavily on their child with criticism and shame. She says, “Just let the child be; his enjoyment will be ruined.” Vani also appreciates her son’s school’s mandate that parents stay away from school competitions. “I don’t attend most of Vishnu’s tournaments, since his cousin also plays and my sister accompanies them where required. We avoid being pushy parents”, she says.

“Try to avoid directing the coach. You are not an expert, and you should not interfere in the relationship between the coach and the child,” Vani advises. But what if there is a clash or a complaint from the child? She says, “I’ve never faced that; Vishnu has been lucky to have an excellent coach throughout.”

It’s also crucial that parents do not pressurize the child to also excel in academics.

It’s also crucial that Indian moms do not pressurize the child to also excel in academics. Vani mentions, “Vishnu scores 75-80% and that is enough for me.” She believes that, more than winning tournaments or topping exams, it’s the values a child imbibes that make him a winner in life. “Not every topper or champion does well in real life”, she feels.

Sheela also feels that it’s important to ask the child every few months if he or she really wants to continue. “Perhaps we did push Meghana, but we were focused more on the personal gains to her health and sleep, rather than the laurels”, she concludes.

Commitment and perseverance have brought these children to where they are in their sport careers. A young sports competitor needs a parent’s warm backing, but not pushing or imposition of parental ambitions. Perhaps the sporting spirit is more crucial for parents to learn!