Our Pictures, Our Words

With striking images, Our Pictures, Our Words presents a visual history of the women's movement in India while highlighting its importance today. 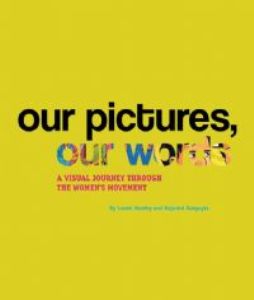 With striking images, Our Pictures, Our Words presents a visual history of the women’s movement in India while highlighting its importance today.

In late 2011, Vijayalakshmi, the wife of Kannada film star Darshan, filed a police complaint accusing him of domestic violence. The immediate response of the Kannada Film Producers’ Association (KFPA) was to issue an embargo preventing an actress, Nikita Thukral, from working in the Kannada film industry, alleging that she had caused ‘marital disharmony’ in Darshan’s family.

Widespread condemnation soon forced the KFPA to withdraw the embargo. Darshan was arrested and, despite the protests of his fans, spent close to a month in custody. In March 2012, a felicitation was organised to celebrate Darshan’s work. Being out of town, Darshan sent Vijayalakshmi to represent him. Marital harmony, it seems, has been restored.

This story contains within it many achievements of the women’s movement in India. That Vijayalakshmi could register her complaint at the police station despite Darshan’s celebrity status. That the Protection of Women from Domestic Violence Act was passed in 2005. That public outrage lifted the embargo against Thukral. That Darshan was not granted bail for a month. Every one of these is due to the contemporary women’s movement.

But the way in which Darshan emerged from custody, seemingly more popular, also symbolises the strength of the patriarchy. In 1971, when female literacy in India was less than 22%, a Committee on the Status of Women in India (CSWI) was set up to study the position of Indian women. Its report “Towards Equality” (1974) showed the way for a new consciousness of and struggle for women’s rights.

Four decades later, Our Pictures, Our Words, (whose title harks back to the 1971 feminist classic Our Bodies, Ourselves), presents a visual archive of this struggle, arranged around the themes of body politics, community politics, societal politics, and politics of access. Insightful commentary is provided by veteran activists Laxmi Murthy and Rajashri Dasgupta.

Four things strike me about the book. First, how much ground has been covered ever since the great project of the contemporary women’s movement in India began in the early 1970s. Individual judgements fought for and obtained, laws amended, new legislation introduced, policy formulated – and the everyday lives of women changed in real, substantial ways.

Almost at the same time, the second thing: how much remains to be done. There is anger in the Saheli photograph of an anti-dowry demonstration in Delhi where women carry Hindi and English placards: “Boycott the Family that Burns the Bride”. But even in 2010, NCRB statistics show close to 8400 dowry deaths in India, roughly one every hour.

The third thing: how long it has taken to reach even this point. Every millimetre of every timeline drawn in this book has been slowly, painfully won. Every new entry on the timeline leaps across lonely years of determined struggle. Often the fight has begun with one woman’s plea for justice. The Supreme Court judgement in the Mathura rape case was one of the earliest rallying moments for the women’s movement in India. Mathura was raped in 1972; the rape law was amended in 1983. But even in 2012, the degrading two-finger rape ‘test’ has not been abolished.

Finally: for those who participated in these struggles, traversing this terrain has been a life-changing adventure. If the book is a visual journey, the images collected here are small, powerful treasures. Whether it is Sheba Chachchi, Karen Haydock, or nameless women drawing their own lives, these images are filled with creative energies. A fist held up, a face shrouded in darkness, wisps of words.“Tum ladki ho.” “Dukh tumhe kya todega / tum dukh ko tod do.” “Not victim. Survivor.”

For me, reading this book is a personal journey. Looking at the timelines, looking at the inside cover with its incredibly lovely Jagori poster “Dream”, I find myself in these pages. We are all here, along with Mathura, Rameeza Bi, Maya Tyagi, Shahbano, Bhanwari Devi, Manorama Devi, and all those who stood with them in sisterhood and took their stories forward. They shout slogans, hold hands, wipe tired brows, draw each other forward in the struggle. They laugh deep belly-laughs of solidarity. Behenaa, they say. Sometimes they scream. Sometimes they are goddesses, holding the world in their hands. Sometimes those hands are empty. Sometimes the voices fall silent.

The powerful images in the 230 pages of this book contain within them all these narratives of rage, suffering and painful empowerment, all the stories of our mothers, our sisters and ourselves, as well as the struggles that our children will have to face.

Which is why this visual archive is such a valuable project. We must gather and preserve these memories, and pass them on for others to draw energy and meaning from them. I hope my children will read the book when they are old enough, and I hope they will continue the struggle for a better world.

If you’re planning to purchase Our Pictures, Our Words do consider buying it through this Women’s Web affiliate link at Flipkart. We get a small share of the proceeds – every little bit will help us continue bringing you the content you like!