Not Only The Things That Have Happened

Not Only The Things That Have Happened by Mridula Koshy is a a haunting tale of loss and longing. 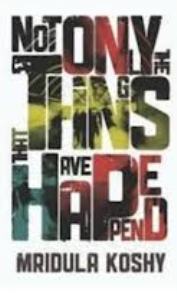 Not Only The Things That Have Happened by Mridula Koshy is a a haunting tale of loss and longing.

Mridula Koshy’s Not Only The Things That Have Happened opens on the deathbed of Annakutty, who clings to the vestiges of her life in the hope that the son she gave up for adoption, decades ago, will return to her. The primary plot unfolds in a mere 36 hours after Annakutty’s death but this is interwoven through, over three decades of memories and moves from Kerala, Madras and Pondicherry in the first half to the United States in part two.

The book starts with telling Annakutty’s side of the tale. Banished to a nunnery in Madras by her father and stepmother, she has a child out of wedlock. Compelled by familial and economic pressures, she decides to give the four year old boy up for adoption to a German couple, a decision she regrets almost instantaneously but unfortunately too late. She spends the rest of her life trying to find him again.

Unbeknownst to her, her son Madhu’s journey into his adoptive home has a rocky start. The German couple she has entrusted him to, lose him on their train journey and he ends up finding shelter amongst a gang of beggar boys and spends three years on the platforms of Delhi station. He is eventually adopted by an American family at the age of seven and rechristened Asa. We meet him as an adult, struggling with his confusing memories of the past, his dysfunctional relationships in the present – both with his adoptive family and his ex-wife and daughter – and his uncertainty about his future course of action.

While the story revolves around these two central characters, the author tells it through the eyes and voices of multiple characters. In addition to her own telling, we hear Annakutty’s narrative from the perspective of her stepmother Saramma, her half-sister Tessie and her young niece Nina, amongst others. At Asa’s end too, we hear from the German woman who struggles with the guilt of having lost him as well as his adoptive mother.

Despite the intricate plot and multiple narrators, the story managed to hook me in and keep me hooked right till the end. Although filled with loss, longing and scarcely a happy moment or memory, the prose is written with an elegant beauty that manages to pull you in without pulling you down. The author has also done a great job of building suspense – though you know what the broad shape of events is almost from the start, there is a slow release of details and connections that keep you wanting to know more, gradually filling in the blanks and building the complete picture, or at least as complete as the author wants it to be.

My only quibble with the book was that it left me wanting more. I guess it comes from my inherent desire to have loose ends tied up, with or without a happy ending. I especially found some of Asa’s memories confusing. I suppose it would be normal for him to be muddled about the actual course of events but as a reader, I was not satisfied with the author leaving me to figure that out for myself. Tell me what really happened, already!

Overall, it was a fantastic read. It is neither a light book nor a happy one, but it is a book worth experiencing.

If you’re planning to purchase Mridula Koshy’s Not Only The Things That Have Happened, do consider buying it through this Women’s Web affiliate link at Flipkart. We get a small share of the proceeds – every little bit will help us continue bringing you the content you like!

Readers outside India can purchase Not Only The Things That Have Happened through our affiliate link at Amazon.