My mother has a green thumb. But when she tried her hand at bonsai trees, I realized that mothers just can’t grow them. 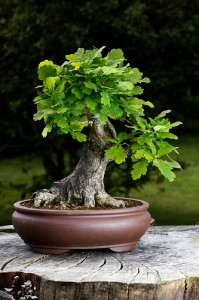 My mother has a green thumb. But when she tried her hand at bonsai trees, I realized that mothers just can’t grow them.

Mother has a way with plants. With a watering can, a spade and garden scissors, she can coax flowers to bloom anywhere. Give her free reign, and she’ll turn your balcony into a florid hothouse. Money plants in bathrooms, ornamentals in corridors or something to light up a window-sill – you name it, she’ll do it.

When Father was posted in Fazilka, we had a house that had extensive grounds, both in front and behind the house. These she turned into a garden and kitchen garden, both of which were the envy of the neighbourhood. Insects thrived on them and often invaded the house, leaving us with a perpetual reek of insecticide. But that was a minor payoff for having a garden that was the talk of the cantonment.

Post-retirement life in Mumbai reduced everything to a six-feet-by-three balcony. A couple of flower-pots with stunted roses were never her idea of ‘gardening’, but that is what Mumbai does to one. With the exception of a baby’s heart that was her greatest possession, life was a drab Eliotesque wasteland. Till the bonsai book happened.

She saw this book about growing bonsai trees in suburban homes at an exhibition. Soil, time, choice of tree, sunlight – it told one everything one needed to know. Bonsai was the ideal hobby for a homemaker in a suburban flat. She bought the book, triggering off the events of this story.

Trip 1: to the flower-pot guy to buy shallow, oval bowls (the ‘bon’). Spending several Sunday hours examining various pots till she was satisfied, then haggling over the price. Trying to get some soil and pebbles on the side.

Trip 2: to the nursery to identify candidate plants (the ‘sai’). Tamarind? Banyan? Weeping fig? She finally settled on a rubber tree (Ficus elastica), largely because she was familiar with growing it in the bigger size.

Then came the process of processing soil. Sifting it through a sieve, handpicking the smallest pebbles, drying the soil – she can do this for hours. Then prepare the pot – plug the holes, layer the sand, firm it, then add the large pebbles. Apparently bonsai soil needs to be nutrient poor in order to keep the plant dwarfed. Then place the cutting, and firm it up with water. Then pull it all up.

Well, after a couple of days of potting and repotting till she was satisfied, the ‘bonsai’ was ready. Of course it was still a little sapling, which had to be turned over several months into a slightly larger tree. Several months – that was a lot of waiting. But there were dreams – of a set of bonsai trees, and exhibitions perhaps, suburban fame. Anything to escape suburbia.

Next day, add a few drops of water. Would that be enough? Would the plant wilt? Perhaps add a few more drops? One could not soak the flower-pot like one did for ordinary house plants, since that is not the right way. Bonsai has to grow slowly, painfully slowly. Then there was the matter of sunlight. One kept the plant in the sun only for a couple of hours. It spent the rest of the day indoors.

No pruning, no sunning. No growth spurts, no new leaves, no budding to watch out for. One minute to water it, another to put it in the sunshine, another to put it back. And then nothing. Bonsai, after all that initial activity, turned out to be a bore. One could watch the plant – and it stood in its pot, six leaves in all, four inches tall. Or one could read the book impatiently.

This lasted for exactly a month. Four weeks of barely watering the plant. In which time, it added perhaps a sixteenth of an inch in girth, and one tiny, tiny leaf at the top. The book said bonsai was an art that required dedication and hardwork, but mother vehemently disagreed. Bonsai was for people who were willing to give it only three minutes a day, not someone who could spend hours with garden tools.

But something hurt her more than the boredom of the whole thing. It was the starvation of the plant. She increasingly felt that she was violating the ‘human rights’ of the plant. It might seem absurd – plants aren’t human – but it felt right in a way. Even a plant has a right to life. It has a right to get as much water as it needs, all the sunshine in the world and to grow as tall as is its natural station.

And so she did the one thing she could do. She removed it from the pot and planted it in a bigger pot. With lots of fine soil. She put in a great deal of water and placed it where it got the most sun through the day.

And the rubber tree responded. It started to shoot up. It put out a new leaf every week. Big broad leaves. It gained several feet in height in the next month. Finally, it grew so big, that it had to be taken out and planted in our housing society garden. Mother was sad to let go of it, but she decided it was for the best. Which turned out right, because the tree is now quite a big fellow.

She could never starve it. And that’s why mothers can’t grow bonsai trees.