Motherhood Vs. Friendship - Can a mother ever take a backseat in a child's world? Yes, as one mother discovers. 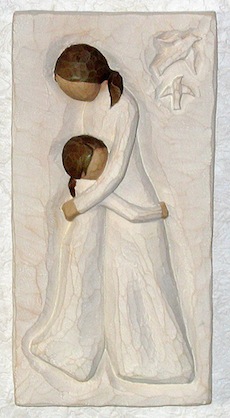 Some years ago, my son Advaita helped me accept that at times, even a mother must take a backseat to a friend.

“Why did you leave me and go to her house?” My son sounded devastated as he came up the steps, his friend following him. “They called me for snacks. My mom was there too. So I went.” Advaita was not convinced. That his friend alone was invited and he was forgotten obviously hurt him.

He picked up his most recent acquisition, a plastic tool set, complete with hammers and spanners. Dangling it right before Ravi’s nose, he triumphantly declared, “My papa got it for ME from US. I’m never going to share this with you!” Not to be outdone, Ravi promptly took up his long-forgotten badminton racket from Advaita’s toy basket, retaliating, “This is MINE, not yours!” So the battle had begun…it was almost time for adult intervention.

Advaita and Ravi are next-door neighbours and soul-mates…well, almost. Their families stay in the same apartment. The kids’ screams and laughter on every holiday they share keep our building alive. Ravi’s mother rushed in, blissfully unaware of the latest in the series of hot-and-cold sessions between the two. Giving me a hurried account of their busy day ahead, Sona coaxed her son away for lunch. Her timing could not have been better.

My four-year old looked up at me, his eyes two small pools about to overflow. He has always refused to accept that he too has been equally disloyal to Ravi in the past, leaving him alone during their play sessions to attend birthday parties, armed with the knowledge that exciting ‘return gifts’ awaited him there.

The issue of why his bosom friend had left him alone on a holiday lay unresolved. And the danger of Saturday lunch slipping away from being the usual family event loomed large. The occasion demanded that I help my son through this heart-breaking episode. Taking up the challenge, I said, “Never mind, you two will be friends again when both of you can forgive and forget. Now, does my sweet angel know what surprise I have for him?” It was a cream roll I had fortunately stored in the fridge.

The “forgive-and-forget” was one of my many attempts to help my son get over such small episodes of betrayal from his friends though it didn’t help much – my little one sat stiff, his face dark with sadness and anger.

I hated to take the aid of the television, and instead, set about blending a pineapple juice, his favourite dessert. Lunch and yummy dessert over, Advaita’s spirits up again, and my husband’s cell-phone put on “mute”, the Saturday held the promise of a few precious, long-awaited hours with just the three of us playing chess and trying out origami shapes.

I am a working mother, staying away from home for twelve hours a day, five days a week. The fast pace of modern life and an endless list of household chores squeezed into the little spare time my hectic schedule allows me doesn’t ever give me enough time for bonding with my only child. All the more so when there are two soul-mates separated by just a few yards.

The next few hours disappeared in origami and puzzles and updates on the latest happenings at his school; enough to make my husband retire for a nap, smug with the feeling of having spent a good amount of quality time with his family.

The afternoon sun slowly crept up in the balconies as my son, a little sleepy by now, nestled in my lap, playfully tossing my hair. Recalling Sona’s plans for the day, with no danger of Ravi coming over to snatch away my time with Advaita, I thought, (somewhat guiltily) that such spats with his friends gave me more time with him. Wasting not a minute, I settled down afresh with an armful of story books. Ugly Duckling, Cinderella, Robinson Crusoe, Red Riding Hood took my son to faraway lands one after the other when suddenly the doorbell went ting-tong.

There was Ravi, standing at the door, with two bagfuls of potato chips, all apologies. “I’m sorry, Advaita. Won’t you play with me?” I wondered what had disrupted Sona’s plans for the day; Ravi wasn’t supposed to be around now. Too eager to get back with his best friend, my son throwing a quick “See you” at me, ran down the steps with Ravi, a chips packet dangling from his hand.

A crestfallen mother had to reluctantly accept the truth – I was only the hurriedly put on “band-aid”. Advaita’s “cut” had healed with the magic word “Sorry” from his buddy. As I leaned back in my armchair, peals of laughter from the two happy souls on the lawn came floating up to me. I smiled at my selfishness (How could I be pleased with their fighting?) and my foolishness (How could I even think of replacing Ravi?).

I took up my long-pending book, relieved that my son had finally learned to forgive and forget (though maybe for a day), but staying prepared to serve as a band-aid once again, just in case he felt the need for it anytime.

As long as mothers exist, there will never be a dearth of these special “band-aids” in this world!