With Mother’s Day coming up, here are some movies for mothers day - we take a look at some fun Bollywood mothers! 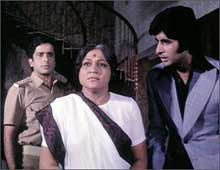 With Mother’s Day coming up, we take a look at some Bollywood mothers and what they may have really had on their minds!

In addition to carrying us in their bodies, mothers have wiped our bums, fed our stomachs, listened to us prattle, and given us a few whacks to make us better human beings. Every year we remember what they’ve done for us and we come to the same conclusion – they’re AWESOME!

But what about the mothers themselves? How do they feel things have worked out for them when they look back? We talked to a few of our favourite Bollywood mothers to see what they had to say about the experience. Apparently, things aren’t quite so rosy, so here is our list of true things you haven’t seen in movies about mothers.

Durga Khote (Mughal-e-Azam)
You’d think life was a bed of roses when you’re the Empress of all Hindustan and your son is the heir. But you wouldn’t believe how hard it is to get good help. Our first batch of nannies got my son hooked on drugs and dancing girls and you had to see my husband’s reaction to believe it! Did he flog those chicks to death or wall them up alive like a good father? No, he sent my baby off to fight a war! Emperors make the most critical fathers, I tell you. Wait until my baby falls in love, he’s going to hit the roof!

Nirupa Roy (Deewar)
I wish I had problems like hers. I’m a single mom from Mumbai and my two sons just can’t get along. The elder one constantly yells at the younger one who never looks him in the face and instead just stares over his shoulder. I try not to be preferential, but it’s hard when my firstborn buys me a house and a washing machine, while the second brings me his laundry and his insecurity.

I try not to be preferential, but it’s hard when my firstborn buys me a house and a washing machine, while the second brings me his laundry and his insecurity.

Jaya Bachchan (Kabhi Khushi Kabhi Gham)
They say girls are sentimental but that’s because they’ve never met my sons. Or my husband. Oh my god, the drama! The weeping, the walking out, the reunions – thank god our castle doors are so large and heavy they’re impossible to bang or I’d have turned deaf a long time ago.

Unknown (Darr)
I don’t know what all these women are complaining about. My son is a total sweetheart. He makes it a point to call me every day and tell me all about himself – even though I’m dead! Isn’t that lovely? He’s got a girlfriend now and he’s completely crazy about her. My baby’s old enough to think of getting married! I’m a little concerned about this Navy friend of hers who’s apparently with her all the time? I don’t really understand the details. But my son says he’s got it all figured out. So who’s lucky? Me.

He makes it a point to call me every day and tell me all about himself – even though I’m dead!

Kirron Kher (Dostana)
My son’s got someone in his life too. His name is John and he’s built like one of those Greek statues. My kid’s got great taste! I’m afraid I didn’t behave very well when I first found out and now my son is so terrified of losing me, he’s come back home and lives in my closet. He’s completely blocking the way to my summer cottons. He says he was just playing a prank and that he actually wants to marry a girl. My little boy will do anything for me! So if any of you have anything to say, you say it to me because nobody picks on my kid! Unless it’s me.

Waheeda Rehman (Chandini)
I hate it when people don’t appreciate my son! He’s good-looking, rich, sensitive, we have a beautiful home and he’s so ready to commit! And now some brat he met while traveling is about to run off with his fiance. I told him to knock that tubbola’s teeth out, but in addition to all his other qualities, he’s also honorable and he says his fiance prefers that hypothermic drunk. He can’t even walk down stairs without stumbling! I hope she enjoys knitting him endless sweaters for the rest of her life.

Farida Jalal (Dilwale Dulhania Le Jayenge)
You know what’s hard? Bringing up a daughter. Especially one that’s smart and beautiful but isn’t expected to be anything other than beautiful. It’s difficult to sit across from her and explain that she can’t have an opinion about her own life. Things got so unbearable, I’m actually happy she ran off with a mop-headed juvenile delinquent she’s only known for a few weeks. I don’t know how she’s going to adjust to life with him and his crazy father, but it can’t possibly be worse than marriage to the chauvinistic hunt-fanatic her own father wanted her to marry.

Lalita Pawar (Sau Din Saas Ke)
I suppose you all want to give me a hard time for my sins. So I like to burn my daughters-in-law in bits and pieces for not bringing in the moolah. Do you know what my mother and mother-in-law would have done in my place? It doesn’t bear thinking about. So I loved my own daughter best. Have you seen those two wet noodle sons of mine? Who wouldn’t prefer my daughter to them? Okay, fine, have it your own way. I’m sorry. I’m sorry I never had my tubes tied. Bah!

Dina Pathak (Golmaal)
This is why I never had any kids. The ones who rented me out were bad enough.