The Question Of A Few Lines

Ritika Sawhney win a Rs.300 gift voucher from our sponsors Zaarga, for her fun entry to our Love Story theme. 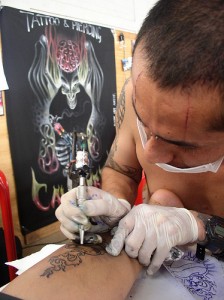 A little tattoo for Love – too much to ask? Ritika Sawhney wins a Rs.300 gift voucher from our sponsors Zaarga, for her fun entry to our Love Story writing theme.

Ritika, in her own words: A social media junkie, bibliophile, traveller and sometimes worker (yes, she is a cubicle-slave). She believes she can write, do you?

“I would do anything for Love, but I won’t do THAT!”

“Quit talking in cheesy lines from forgotten numbers, will you?” I snarled.

“Hey, that’s not fair“, he argued. “If we’re going to talk about using cheesy lines, then I am going to have to…have to…” he trailed off.

“Ha. Couldn’t remember an instance of me using a cheesy line, na? Maybe that’s because, I DON’T?”

Of course, I knew I was being unfair to the poor guy. I probably had used cheesy lines like that myself any number of times, but given his memory or lack of it, I got away.

And what was at stake wasn’t really the question of using lines from forgotten numbers, cheesy or not. You may not think of this as a big deal, but if you’ve ever had the experience of the man of your dreams claiming that he would climb the stars and fetch the moon for you, yet refusing to get a teensy little tattoo done on his broad shoulders (well, one of them) purely on the grounds of ‘I hate needles’, you’ll know what I am talking about.

I mean, c’mon, it’s not like I was asking him to get the American eagle etched all over his broad frame, with its wings artistically falling off his shoulders, although I admit that would look good too. All I was asking for was a few lines – a little heart (and not in pretty pink, but a very masculine, deep red) and it would be quid pro quo – I was planning to get a little heart done too. Does the lady ask too much?

“You don’t really love me. You’re already thinking of what your next girlfriend will say about the heart.”

“C’mon jaan, it’s not that. I will never love anyone else, you know that,” he protested.

The next day, we went off to Brahma’s. A bunch of folks from my class had got their tattoos done with them, and lived to tell the tale; infection-free.

He went first. He said it would be easier if he didn’t have to watch me wincing through it. I watched him instead, gritting his teeth and what was worse, not even bothering to wipe the tears that rolled down his cheeks.

It was over in a few minutes, but it seemed to last at least an hour; at the end of which, while he was putting on his shirt, I quietly slunk out of the parlour and ran down the street.

“Hey, where are you going? That’s not fair!” I could hear him screaming. “You come back here now! NOW!”

Zaarga.com – a new online shopping portal – brings to you exclusive home and lifestyle accessories from the best of contemporary Indian Designers. The products you find here are likely to be very different from any you find in regular stores.