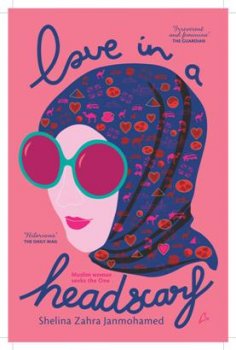 Love in a Headscarf by British Muslim writer Shelina Zahra Janmohamed is another ‘searching for the right man’ story but narrated engagingly.

“It is a universally acknowledged truth that all Asian parents want their children to get married and settle down.”

Shelina Zahra Janmohamed’s first novel, Love in a Headscarf doesn’t quite open with this sentence but it crops up as you turn the pages – an unabashed tribute to Jane Austen and an acknowledgement that once upon a time the mechanics of arranged marriages were the same worldwide. What makes this book different from all the other stories of ‘Finding the One’ (and yes, Jahmohamed is open about the fact that she needs to find the one), is that it has been written by a devout Muslim woman who wears the hijab. And a rosy pink hijab into the bargain.

Once you’ve recovered from the rosy pink hijab confession, you realise that the book actually might belong to a strange phenomenon called Islamic chick lit and a very different kind from that written about in books like Girls Of Riyadh.

Janmohamed, a British citizen with an Oxford education and a devout Muslim, wants to find her soul mate in the time-honoured manner, navigating the rules laid down by Buxom Aunties and Nylon Naanis. Those rules include diktats like “Girl must be younger, shorter, less educated than the boy and pale, homely, and domesticated”.

Janmohammed invites you into the secret she hides under her headscarf and gets down to her search right away, beginning with the family getting ready to meet the first of the young men. Her mother is fussing with tea and samosas – home made of course, far more difficult to achieve in Britain than in India.

That is the first of 50 organised meetings surrounded by a bustle of anxious parents, aunts, grandmothers and Imams. Janmohamed is open and funny – her first love, she confesses, was John Travolta who she dreamt would turn up at her doorstep and change his religion for sheer love of her; a confession that most readers would not expect given the traditional expectations from a devout Muslim woman.

An Indian reader will possibly find nothing to wonder at in all the tales of arranged meetings – those are well plumbed by Bollywood and national soaps. The marvel of the book lies in the fact that it is written by a modern woman who believes in her faith and who gently points out that there are many misconceptions about Islam. She also believes that being a British Muslim gives her an advantage. “The different cultures, histories, religions and heritages … were not burdens, but instead gave me a unique perspective so that I could see things from many different angles. I could bring together my cultures, my faith and the clear vision that Islam offered to start building a more hopeful future.”

Janmohamed invites your sympathy when she talks about the difficulty of getting up for prayers at dawn. “With the thought of having to get up for work again in less than three hours, I searched for a delicate balance between being awake enough to pray and not so awake that I couldn’t go to sleep again.” She also goes wandering into Jordan with a group of likeminded female Muslim friends and they are liberated enough to spend nights in the open under the stars accompanied by an all-purpose mat that works for both sleep and prayer. It is moments like these that take the book beyond being a mere Bridget Jones kind of read.

At the same time, occasionally Janmohamed’s musings on faith go on perhaps a little too long. For example, 9/11 comes into the book and the tale of finding true love is held up while Janmohamed explains what it meant to be wearing a hijab in a climate of anti Muslim feeling.

Though the book runs out of steam by the end, there is enough to keep the reader turning the pages. It is hardly surprising that the new imprint Amaryllis chose to announce its presence in India with this peek into the romance and faith that lies under the modern Islamic woman’s hijab.

If you’re planning to purchase Love In A Headscarf, by Shelina Zahra Janmohamed, do consider buying it through this Women’s Web affiliate link at Flipkart. We get a small share of the proceeds – every little bit will help us continue bringing you the content you like!

Readers outside India can purchase Love In A Headscarf through our affiliate link at Amazon.

Too Asian, Not Asian Enough