Land Of The Well

Sampurna Chattarji’s Land Of The Well is a psychological thriller that explores the murky depths of human minds. 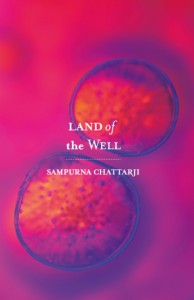 Sampurna Chattarji’s Land Of The Well is a psychological thriller that explores the murky depths of human minds.

Success comes with a price; often steep. This universal truth is applicable to all. Youngsters while pursuing academic brilliance manage to alienate themselves from other students in their class. While harbouring a sense of awe when it comes to achievements, equally, there’s a feeling of contempt and resentment amongst those who shun their geeky classmates. The latter seldom get invited to all the fun and usually end up as loners. Further, as a defence mechanism, such students develop an arrogant attitude in order to not get hurt and keep away humiliation from supposedly “lesser” classmates.

Parents too play a pivotal role, in their lopsided development. Under their overbearing tutelage, such kids feel stifled and develop a sense of rebellion. Teenagers often resonate with songs like “I want to break free” and “Another brick in the wall”; not always as the original lyrics may have meant it to be. Sampurna Chattarji has captured this part of personality development through her book Land Of The Well. The book delves into the insidious corners of the human mind and explores how evil begets evil and seeks its own.

Pappu alias Paps alias Pappu-mian alias Insect is the protagonist in the novel. The author in her story-telling mode always refers to him as “The Boy”. Characters are not referred by names but by a conspicuous attribute. The man who is reed-thin is christened as Reed Man, for instance, and continues to be so till the very end. This effectively creates a certain distance, a chimera, in the mind of the reader. Being a psychological thriller at one level, this helps to build that element of the dark side of life.

The boy is on a holiday in Goa with his parents. He is your archetypal brilliant student who doesn’t have too many friends and leads a very protected life. He is thoroughly bored, so much so, that he starts playing Table Tennis with one of the staff members of the hotel (Reed-man). On the eve, when his parents are about to leave, he requests his sojourn be extended by a couple of days more so that he can be on his “own” and experience the hedonistic pleasures of Goa. Of course he does not say as much, but it is implied and his parents reluctantly agree.

Normally, we would empathize with the boy and feel happy about this. After all, a growing boy does need his own time and space. It is only when you reach page number 348, and the book ends, that you so badly wish that his parents had not relented and taken him along with them – back to Bombay, back to the safe confines of home and roots. Rootless-ness and homelessness can have a violent impact on young impressionable minds.

After his parents leave and he is left alone to his designs, he befriends a group of fairly young people, who are in their late twenties. From a distance they look “cool”, which is all the more reason why he must be “one of them” and belong. “The next day changed everything. Everything changed the next day.” When you read these two lines, a chill runs down your spine. As you progress, the horror of it all deals a sickening blow. It’s morbid. You want to rewrite the novel and send the boy packing with his parents. After all, nerdy and “uncool” people also do well in life and live happily. That’s how powerful Sampurna Chattarji can get. She gets under your skin while narrating about sick minds. There are no sexual aberrations, but mental sickness of a monstrosity which is nothing but abhorring. Who are these characters that the boy meets in Goa, a place synonymous with fun and laughter? What sort of names are Baby (man), Ciggy, Poka, Baldy, Tiger, Tiny, Squeezy, Momo, Angie and Dodo? What dark secrets do these people harbour and interestingly, why do they all bind together?

As you read on, you also gather deep insights of authors who have written about death – like Jorge Luis Borges in Brodie’s Report, Thomas Mann in Death In Venice, Susan Sontag  in Illness As A Metaphor and Yukio Mishima in The Sailor Who Fell From Grace; fantasising about death, writing about death, glorifying death. People who are physically well (healthy) are nothing like the people who are ill, for it is they who have the real power. Gathering sympathy, a dying patient has complete command over his loved ones, which he / she may not garner in better times.

This is a dark novel, but will find acclaim with many readers. The dark side of human behaviour is progressively finding vent in literary forms of expression; not the knife-toting, gun-slinging bad, but of the surreptitious kind. Scheming, deceitful and frequently putting an arm around you under the garb of friendship.

If you’re planning to purchase Sampurna Chattarji’s Land Of The Well do consider buying it through this Women’s Web affiliate link at Flipkart. We get a small share of the proceeds – every little bit will help us continue bringing you the content you like!

Readers outside India can purchase Land Of The Well through our affiliate link at Amazon.