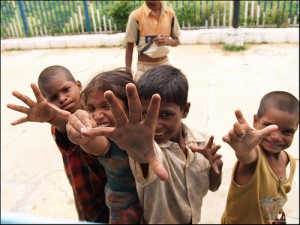 In this Shopping Story, Tuhina Varshney talks about the compassion behind a simple act of buying some pyjama strings.

Tuhina, in her own words: I am a Soft Skills and Personality Development Trainer, Career Advisor and the author of I’m Not Afraid Of GDPI.

It wasn’t something big or fancy that I wanted, just some pyjama string. You know what we call nara in Hindi and use to tie up our salwars, petticoats and pyjamas. Simple little thing but has to be bought anyway as they don’t just magically appear when you need them.

I had a very clear idea where I could find some. It’s available in shops of course but in my city it’s also sold a bit unusually. Little boys carry rolls of them neatly arranged in medium-sized flat boxes to sell in lanes in between the shops. They run after you and insist that you need to buy some. They remind me of those chaiwallahs on railway platforms. As soon as a train arrives all of them start running and shouting “Chai, garam chai!” In the same manner, as soon as these boys see women, they crowd around and thrust their wares at them. They know women always need more pyjama strings!

That day as I went about my shopping, I waited for some of these boys to find me. And they did. They clamoured all around when they saw I was interested. But I spotted this very small boy, 8 or 9 years old, standing a little way off, holding a box of string and looking at me expectantly. He had a strange quietness and dignity about him and he looked at the others as if he disapproved of their method of selling. He just stood there straight and patient, almost as if he knew I would ultimately choose to buy from him.

I went up to him and asked him his name.

“Dewan,” he said clearly. “Would you like to buy some string?” he added with poise.

We quickly struck a bargain and he deftly measured out the length I wanted. While handing me my little packet he didn’t ask for or even say out the amount I owed him. I thought he cannot do the math and is relying on my goodness to pay him the correct amount. I asked him nevertheless.

He immediately told me the correct amount. Something made me ask if he went to school.

“Which class?” I queried further.

My jaw dropped! He looked so tiny. He had a small round face, smooth skin, sharp features and clear intelligent eyes. And he was 12 going on 13.

We got talking. He told me how his mother sold petty articles and fruit and how he helped after school. He dreamt of the day when he could finish school and start ‘work’ so his mother wouldn’t have to. He was so tiny and yet now he seemed so big and grown-up!

I bought more string. And then some more! My daughter wanted to have some fresh fruit juice. So we asked him if he would like some. He refused politely but we took him along anyway. When he got his juice, he had a few small sips and ran away with it. He went round the corner and offered it to a woman sitting with a pile of guavas to sell. His mother. They shared the glass, each insisting on the other to have more. Such a heart-warming sight!

I have bought string from Dewan on each trip of mine to that market since then. Hey, I don’t need all that string but what is a little extra string about the house if it helps a little boy. Do you need pyjama strings? You are welcome to come and help yourself to some.

Day In The Life Of: Payal Sakhuja, Ripple Links