Kitchen disasters can be avoided with perseverance and patience – two virtues that made this chocolate chip cupcake recipe a success! 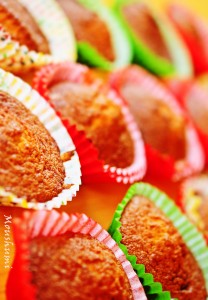 Kitchen disasters can be avoided with perseverance and patience – two virtues that made this chocolate chip cupcake recipe a success!

I missed my appointment with the Creator the day he was to install this app called Perseverance in me. Add to that the fact that I have the patience of a 2 year old and a penchant to cook up ambitious plans, my life has been a series of projects that begin grandly but fizzle out somewhere along the way!

Like the endless diet-exercise routines that started with great expectations and meticulous to-do charts but were forgotten before the week was out! Or the time I tried to master Tamil to impress the Tamilian hubby. I went looking for a book to learn Tamil in 7 days, believing in my arrogance that is the amount of time it would take for me to learn! Needless to say, not only did I not master Tamil in 7 days, it has been 12 years since and I can still barely speak it!

Most sensible people would imbibe something from these experiences, but not me! Such life-lessons usually escape me till they hit me on the head and leave behind a sizeable dent. These experiences too, were conveniently forgotten till I embarked on my cupcake-making mission – and ended up with a spectacular kitchen disaster.

When it comes to baking, I make a decent meatloaf, a helluva kebab and a yummy pizza, but when it comes to cakes or cookies, I am lost. I completely lack a sweet tooth, as does the husband, so a ‘why learn when won’t eat’ logic kept me from making any attempt in the past!

Then I became a mother, and the Universe, in a bid to correct the imbalance in our dessert spurning household, decided my sons should demand cakes at every meal! So, like any doting Indian mom, I bit the bullet and proceeded to bake the first cupcakes of my life. How difficult could it be to mix a few ingredients and stick it in the oven till it got done, I asked myself. After making improvisations to the recipe as I assumed I knew best, I put the cupcakes in the oven and sat down to spend some quality time on Facebook!

…my cupcakes were doing their own social-networking inside the oven, the batter from each reaching out to the others in a giant group hug session!

However this time the Gods seemed intent on teaching me a lesson that I wouldn’t forget easily. As I was connecting with friends in the virtual world, my cupcakes were doing their own social-networking inside the oven, the batter from each reaching out to the others in a giant group hug session! I didn’t realize anything was wrong till a burning smell reached my nose. Not only did my cupcakes emerge a homogenous mass, they were also burnt at both ends!

The husband took one look, and diplomatically said, “You know I don’t eat cakes. Too many calories”! Twin1 was as diplomatic as his Dad, “Mamma, me likes fruits, no likes cakes”, he explained. Twin2 was more gallant; he took a look at my crestfallen face, and ate one. But before I could rejoice, he threw it up on me!

A happy ending to my kitchen disaster

All my visions of becoming the next Martha Stewart came crashing down! Maybe some people aren’t meant to bake, I thought, consoling myself.

“Not true! Baking is all about practice”, said every expert baker I knew.

Then, as I was ready to quit, my boys asked “We make cake again Mamma?”

That clinched it! I couldn’t quit now. What would I be teaching my sons?

So I wasn’t meant to be a natural, but atleast I could be the Ivan Lendl of baking, striving for perfection through sheer grit!

Thus like a phoenix, rising from the ashes of my cake burning disaster, I decided to try again. Swallowing my pride, I focused on learning to walk before I could fly. I followed instructions to the tee, I kept vigil like a hawk and I stayed off Facebook while the cakes were baking.  And the rewards of my diligence were a batch of perfect vanilla cupcakes with chocolate-chips!

In a mixing bowl, mix sugar and butter. I used the spatula first and then the electric beater.

After it is mixed well, add vanilla essence and the eggs, one at a time. Beat well.

In a separate bowl, mix flour, salt and baking soda.

Now add the flour slowly into the egg-sugar-butter mixture and mix well. If it is too thick, add milk, little by little till the thickness is right – it should pour out well and but should not be too watery. Add chocolate chips to the batter. Grease the cupcake liners and pour batter into them, filling only half of each.

Bake at 180 degrees for 25-35 minutes (varies by oven) till a knife/toothpick comes out clean when inserted into the centre of the cakes.

“If you can’t excel with talent, triumph with effort.” ~ Stephen Weinbaum