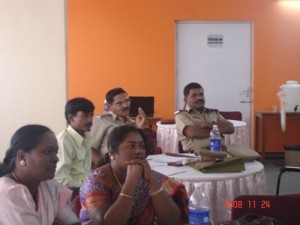 Between the months of May and June there is a sharp increase in the number of female sex workers. These are women who enter the trade to earn enough to pay for their children’s education that year, says Ramchandra Rao, Deputy Director, Community Mobilisation, Karnataka Health Promotion Trust (KHPT). An organisation set up in 2003 under the aegis of the Karnataka State Aids Prevention Society (KSAPS) in partnership with the University of Manitoba, Canada, KHPT is focused on prevention, education and reduction of risk to HIV, especially among high risk groups like female sex workers and members of the third sex.

Living with HIV: A struggle for the marginalized

In a country where over 2.39 million people are living with HIV (third largest population in the world according to the latest UNDP report), prevention and education need special focus and an intensive approach. KHPT’s efforts are unified primarily under four programmes; Samastha, Sankalpa, Spruha, and Sampoorna, which range from risk reduction to capacity building in health care institutions and training.

“In all our work one central aspect has been to have communities at the centre of what we do. What always works is to have an evidence based approach. KHPT has followed this principle for every project. Before planning, strategizing and implementing, we always generate evidence through study, survey and research to gain an understanding of the ground reality and take a scientific approach to understanding what the gaps are and the possible ways to fill those gaps”, says Mallika Bidappa, Manager, Advocacy, explaining KHPT’s approach.

KHPT assists female sex workers, clients, the transgender community, and people living with AIDS in building Community Based Organisations or CBOs. The organisation not only advocates the cause of its beneficiaries, it also works at the grassroots level to change mindsets on HIV/AIDS. Further, KHPT helps other NGOs working on these issues to enhance their competencies by ensuring access to quality information and skill building.

KHPT: Reaching out to sex workers in India

KHPT works with the government at all levels to ensure better care and support. “We believe that the govt is the sole large organization whose reach can never be compared to any NGO. They have the resources, the power and the intention to bring about the desired change. We provide technical support to the government programmes through the TSU (Technical Support Unit) of IHAT, a sister concern of KHPT”, says Bidappa.

Ms. Bidappa continues on this thread, “We advocate for policy level changes. We have a senior government officer (on deputation) as part of the Board of Directors of KHPT who currently looks after the Advocacy wing. It is a continuous process and we try to present the realities to the government. Leveraging support and resources from already existing established government bodies is always better than running a parallel program. We have a lot of support from the women and child department”.

Given their stand on community involvement, KHPT has attempted to democratise the setting up and management of CBOs. The structure today is that a site level CBO nominates 2 members to their respective district level CBOs which in turn nominates 2 members to the state level CBO. The management of the state level CBO rests with an elected body. On ground, their efforts have resulted in the setting up of 35 district level CBOs. The number of site level CBOs can’t be tracked because they are not registered bodies.

Some CBOs have started microfinance and co-operative societies. One of these in Bangalore has given out a collective loan of over one crore rupees. The true achievement of these financial institutions however is in the fact that they have a 100% recovery rate and in the fact that they have made the lives of many simpler. “Because most of the high risk groups like sex workers can’t get bank loans, they go to money lenders who charge them exorbitant interest rates. Think one rupee per day for every hundred rupees borrowed. Now they can get loans for as little as 18 % per annum”, says Mr. Rao.

KHPT has held workshops for over 30,000 sex workers between 2008 and 2009. With the understanding that this conversation must involve all the stakeholders they hold workshops for the police, auto drivers and clients of sex workers, to sensitize them.

Shantamma, the president of the state level CBO for sex workers says that KHPT aids the CBOs in not just finding legal aid and identifying support agencies but also in training. “There is a lot of taboo attached to this line of work so many women aren’t open about it. So when the women go to hospitals to get check ups and they are asked what they do, the women get scared and come back. So we go with them”, says Ms. Shantamma.

One of the main concerns for any organisation working against HIV/AIDS is the children infected or affected by the disease. These vulnerable children need special focus. Active in 2 districts, the child foster care programme run by KHPT is specially structured keeping these kids in mind. The idea is simple but ingenious. The organisation first identifies women who have lost their partners to AIDS and assesses their capacity to be caregivers to vulnerable children. They then match child to caregiver after considering the pair’s compatibility. In what seems to be a guardian themed model, the caregiver then becomes responsible for the child’s well-being. Placing these children in the care of a person who understands the disease is important because the care giver provides the child with not just food, shelter and education but creates a sympathetic environment; one within which the child can grow and prosper.

Ms. Shantamma suggests that their collective efforts are beginning to give fruit. “There is 60 % betterment in our lives as of today”, she says and gives credit to KHPT’s Sankalpa programme.