Kala Raksha Vidhyalaya, a design school situated in Kutch, emphasizes the importance of women in reviving the various craft forms of India.

Her fuchsia clothes brighten up the barren landscape around her. Sitting in the confines of her home in Sumrasar village, 25kms from Bhuj, Gujarat, Hariyaben Uttamchand uses a vocabulary that’s at par with any urban designer. She explains how one needs to understand colours – primary, warm and cool colours, and the concept of contrast in a craft like embroidery.

Kunvarben sits on the porch and strains to concentrate through her pair of glasses. She pokes a needle with a crimson thread into a piece of black cloth. The 48-year-old may look like the cranky aunty who lives next door but in reality, she is one of the vibrant minds who determines the future of craft as an art form and as a business in Kutch.

82-year-old Jivaben looks every bit as she was brought up to be, a Rabari woman, but she makes time to answer questions on design and embroidery techniques asked by young girls in the village.

Improving the lives of Indian women through a crafts revival

Tying these women, their families and fortunes together is Judy Frater, founder of Kala Raksha Vidyalaya, the first and perhaps only design school for rural working artisans in interior Kutch. Having worked for many years with artisans who produce Suf, Kharek, Rabari, Pako, Jat and Mutwa embroidery, she acknowledges that what artisans create for themselves may not necessarily be appropriate for the market. 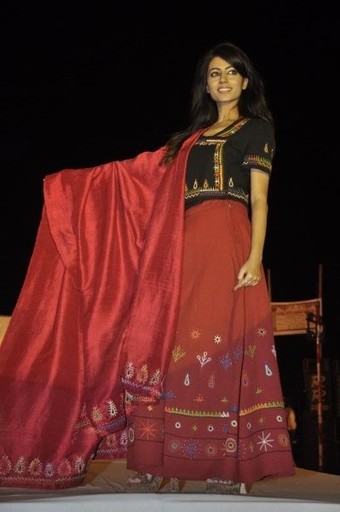 A model displaying one of Kunvarben’s creations at a ramp show.

Handicrafts in India make up a 7 billion dollar market, growing at 15-20% every year. Craft is the second largest employment sector and the fastest growing export sector in the country. But the artisan doesn’t often get to see this growth. According to the The ‘Craft Impact and Economics’ study by the Craft Council of India, released in April 2011, developmental policies to date have marginalised the people at the centre: the artisans.

Traditionally, craft was never intended to be sold or to generate revenue. They were created as social, cultural expressions either for personal use or to be bartered for something. Embroidery, Kutch’s most celebrated craft, was done by women for their dowry. However, with changing times, crafts became a huge market, and those who could adapt did well, while the others, along with their art form, faded away.

“There isn’t just one solution to help the artisan,” points out Frater. The usual “design intervention” approach in apparel, she says, is a very ‘imperialistic way of looking at it’, where the artisan’s own tradition remains no longer their own. She adds, “You are a worker on your own farm. You sell the land to someone else and become a bonded labourer. The worst part is that the artisan assumes that the person intervening must always be right.”

“How about letting them coming up with solutions?” she asks. “What the artisan needs is market knowledge and perhaps some language skills. What helps is giving them vocabulary and experience to relate to a wider audience.”

Which is why getting artisans to take the problem into their own hands – empowering them to design, price their work and go successfully to the market is at the core of Kala Raksha Vidyalaya’s work.

Turning the artisan into an artist

Started in 2005 in Mundra Taluk, Kala Raksha Vidyalaya screens artisans for skills and aptitude before choosing them for the year long programme. The course introduces rural artisans to contemporary market driven design based on problem solving within tradition. Its focus is on acquiring knowledge and skills that enable innovation.

Since rural artisans spend long stretches of time working at their craft and have domestic chores to attend to, classes are conducted for brief 2-week periods in a residential setting. Male and female artisans attend courses separately respecting social norms. Artisans are encouraged to draw with hand for the first time and take time off to notice their own expressions.

Computers are used to enable their work as a tool. Interactions with visiting senior artisans and students of premier design schools such as NID, NIFT, Shristi School of Design happen each year. Artisans are aided in creating ‘collections’ for particular target groups, also involving field trips where they are able to visit outlets and get an understanding of what is around in the market at the moment. At the end of the year, the artisans’ work is evaluated by an esteemed panel of judges before being shown on a ramp show.

Teaching and encouraging the artisan to solve problems act not just as a long term solution in keeping traditions alive but is also a tremendous confidence booster. This is especially true with women, says Frater, many of whom have never been to school before and make it to the design school with much social resistance.

The importance of women in reviving crafts 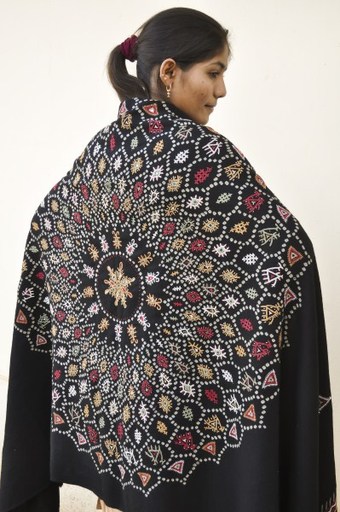 Kunvarben Bhikabhai Rabari from the Lodai village in Kutch is an example of an artisan-designer who has found her ground through the school. An artist at heart, Kunverben emphasises that after being to school she uses embroidery to express her moods and inspirations. “If I walk by the stream and see plants and stones, then you’ll see my work will have more grays, browns, green and blue. This is how I can express what I am feeling, I am not a painter,” she explains.

Bihka bhai, her husband, says he couldn’t believe his wife went to school at all in the beginning. “She’s never been to school,” he repeats himself. But now he says he feels proud that she is respected and is sought after for her work, something he still hasn’t come to terms with. Depending on the volume of her work, Kunvarbhen today earns anywhere between 2500 to 10000 a month, which she keeps with herself for household expenses.

Kunvarben is part of the Rabari community in which women are now involved in commercial work for the first time in their lives. In her community, embroidery dowry was banned in 1995 when the elders realised that women were wasting years in finishing their dowry embroidery, translating to late marriage for many. Since then, the craft that was always a part of their traditional lifestyle has for most part lost its relevance.

Working with the Rabari community

The rabari community is relatively more liberal for women than other communities, says Frater. Many in the community are living stationary lives abandoning their earlier nomadic lifestyles. The community has also been open to education and young girls are attending school for the first time in the community’s history.

While friends and family trickle in to listen to Kunvarben, one of the visitors is another senior artisan from the village. 82-year-old Jivaben Ratabhai Rabari is the oldest lady in the community to have gone to the design school. Born in Dhaneti where she was the only girl in the family, Jivaben lost her father when she was 1 ½ and her mother died when she was 7. Since then she was looked after by her father’s sister. Much of her childhood, as is for nomadic communities, was about migrating from place to place with sheep and goats. Already having worked with Kala Raksha Trust, the founding NGO of the design school for sometime Jivaben wanted to take the plunge and join the Vidyalaya in 2009. “I wanted to learn and earn. I was not ashamed to go to school when I was so old,” she says.

Today Jivaben says she earns around 3 to 4000 a month. In fact after graduating, she says she feels confident and can communicate much better. At school, you have all the space to concentrate and don’t have to worry about other household work, she explains. The old ladies who would have been discarded as useless are respected and sought after today by the young for their traditional skills, something that has changed life for many women, she says.

Like Jivaben and Kunvarben, Hariyaben is full of ideas and ambitions. She is part of the community that came to India from Thar Parkar in east Sindh forty years ago. Like others from Sindh, Hariyaben practices suf embroidery that bears a strong resemblance to phulkari of Punjab and other embroidery styles found in Afghanistan and Pakistan.

A 2009 graduate of the design school, Hariyaben says a memorable part of the course for her were the field trips to Ahmedabad where she had the opportunity to visit retail outlets such as FabIndia and Bandhej. This, she says, has inspired her to dream about her own products for interior design. Each student designs for a particular client taking into account the age, status and preferences of the customer. This is another important exercise that Hariyaben says has worked for her. Enterprising, confident and creative, she has been responsible for various successful projects such as designing recycled toys at Kala Raksha and the Parkari dolls.

In craft-rich Gujarat, it is the sprawling Kutch region that works as a key example of market lessons in the sector. Kutch is home to thirty different crafts that include bell-making, leather, metal and stone work, lacquer, pottery, weaving, block-printing, tie-and-dye (bandhani) and embroidery practised by around 40,000 crafts people from diverse communities.

With societies changing and markets opening up, many crafts have lost their relevance. Those that couldn’t catch up simply faded away. Keeping the tradition alive while making it contemporary for a consumer aesthetic as well as the identity of the artisan intact, then, has been the challenge, the effort and the success at Kala Raksha Vidyalaya.

“Where else on earth can you be a housewife in a remote village and still get to design,” asks Hariyaben, while working on an appliqué assignment on a hot summer afternoon along with other women of their community, their daughters, and daughters-in-law.

About The Author: Elizbeth Soumya is a freelance writer, copy editor, traveller and conservation enthusiast.

Festive Home Decor With A Conscience

It Wasn’t Mid-Life ‘Madness’ To Wear Shorts But A Choice I Made!