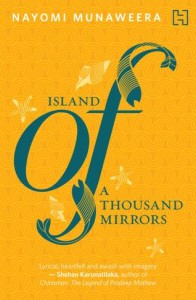 Nayomi Munaweera’s Island Of A Thousand Mirrors explores how women in Sri Lanka, on opposite sides of the civil war, negotiate the realities of life.

This poetic debut which sweeps you into the turmoil of Sri Lanka was long listed for the Man Asian Award 2012 and is also the regional winner of the Commonwealth Book Prize in Asia this year. Island Of A Thousand Mirrors tells the story of three women set against the Tamil-Sinhala conflict ending with the death of Prabhakaran and the Civil War that raged. 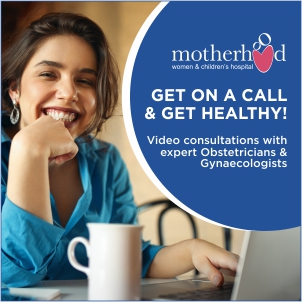 The book opens with the tale of a girl who lives in a privileged part of Colombo, in a two storeyed house on Wellawatte beach that belongs to her mother Sylvia Sunethra. The upper storey is rented out to a family of Tamils and a funny internecine conflict rages between upstairs and downstairs; until riots break out and the family is scattered.

The Sri Lankans migrate to the US, the Tamils to the north of Sri Lanka. Sylvia’s granddaughter Yasodhara and her sister Lanka are indoctrinated into the great American dream by their parents Nishan and Visakha with varying amounts of success.

On the other side of the class divide, back in Sri Lanka, there is Saraswathi who is forced through no fault of her own to join the LTTE and abandon all hopes of a career in teaching, However, not before she comes into contact with Yasodhara who, along with her sister Lanka, have chosen to return to the island of their birth and see whether they can make a difference with their American knowledge.

Saraswathi’s story opens promisingly but gradually fades out from lack of conviction. Also possibly because the reader by now is used to the beautiful poetic prose of Yasodhara who has already described her own childhood and growing up, Saraswathi seems to be treading familiar terrain. Even her transformation into a person devoid of humanity seems to be expected and a little disappointing.

Much of the novel is on similar lines as Chitra Banerjee Divakaruni, Jhumpa Lahiri and the rest of the Indian diaspora. The migration to America, the coming and going of people from the home country every year dreaming of green cards, with nightmares in their eyes. What makes the book different to Indian readers is the background of the Sinhala Tamil conflict. However, one requires to have a little background information about the Civil War and for those unfamiliar with the details of the conflict, the book may be confusing. Munaweera actually describes the events from the Sinhala viewpoint, even though she does try to present both sides of the story through a fleeting romance between Visakha and Shiva which falls apart because they lack the nerve to tell their families.

Munaweera went to great lengths to ensure that her descriptions of violence were accurate, even talking to rape survivors. Of course all acts of violence in the end are the same violence and for Indian readers again mob violence is very familiar terrain. What most readers will take from the book is the lyricism and the vision of Sri Lanka as an idyllic beautiful place, the pots in the kitchen, the sand and surf and the salt on one’s skin.

If you’re planning to purchase Nayomi Munaweera’s Island Of A Thousand Mirrors do consider buying it through this Women’s Web affiliate link at Flipkart. We get a small share of the proceeds – every little bit will help us continue bringing you the content you like!

Readers outside India can purchase Island Of A Thousand Mirrors through our affiliate link at Amazon.