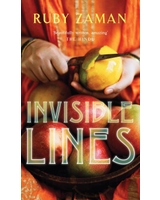 Ruby Zaman’s Invisible Lines brings us a flavour of the turbulent days in 1971, when Pakistan split to form Bangladesh.

In any larger history, there are millions of micro histories that occur, creating the tapestry that one reads about in the historians’ account – the whole is always larger than the parts. Sometimes these smaller accounts get told, but mostly, they are forgotten. Ruby Zaman’s Invisible Lines aims to relate a handful of these micro histories to a larger audience.This is certainly a story that needs more attention, especially in the sub-continent. I was surprised at my lack of knowledge of the nuances of this Independence war, overshadowed as it is by the more well-known partition story from 1947. For attempting to make an honest account of it, one must laud debutante author Ruby Zaman.

For more than 20 years, Eastern and Western Pakistan were one nation. How they managed operationally is a wonder, considering India lay smack bang in the middle. That premise itself holds much promise for a tale…or several. However, this book makes the one year of the independence war fought in 1971 between the Pakistani army and the Bengali inhabitants of Bangladesh central to its theme. It attempts- by letting us into the everyday lives of ordinary citizens -to give us a flavour of the stakeholders of this struggle, their agendas, their ambitions and their varying perspectives. It really highlights, in small ways, the extent that people will go to, to retain power or win their independence.

We start with the story of Zeb – Zebunnessa Rahim – at the Bangladeshi embassy in London – and the tale unfolds back from there to her life in Bangladesh, just before and during the ‘Liberation War’ of 1971. On the way, we meet scores of other characters whose lives criss-cross hers. Unfortunately, though this entire situation makes for potentially ‘evocative and powerful content’ as the back cover proclaims, Zaman’s writing style is more like newspaper reportage. It rattles off the life stories of several characters, their back stories and current situation in a direct and factual manner; till you have almost lost track of who is related to whom in what way.

The characters – even though they are going through such an intense experience – seem strangely empty; cardboard cut-outs that act, talk and behave in exactly the way you would expect them to. The dialogues seem flat, everything is just too predictable, some critical loops like Zeb’s relationship with her mother or ‘half-Irish lover’ are never quite closed, and by the looks of it- Britain, Italy and Germany let Bangladeshis fly in, out and stay at will! There are many reasons to read Invisible Lines by Ruby Zaman, but the lyrical beauty of her prose is not one of them.

So what redeems it? The obvious honesty and personal resonance the author has with that period of history comes through clearly. She has tried to create characters that all Bangladeshis would find familiar, while making no apologies for lapsing into Hindi or Bangla every now and then in the narrative. The inner struggle that some Bengalis felt during this War – torn between patriotism towards Pakistan as the parent and a longing to be independent as a Bengali country – comes out nicely in the story of Nazir Ahmed and his Family. For me, this was a new perspective, and one that made me look at that struggle with new eyes – an independence struggle fought not over religion but language and the credentials of your origins!

The book is worth a rainy afternoon, but it did remind me of some folks I know; very interesting in reality but not quite realizing it, and therefore continuously talking to make themselves sound so.

If you’re planning to purchase Invisible Lines, do consider buying it through this Women’s Web affiliate link at Flipkart. We get a small share of the proceeds – and every little bit will help us continue bringing you the content you like!

Why Women Entrepreneurs Should Consider A ‘Medium’ Sized Business