Blessed with a level head and lightening feet, India’s ‘Golden Girl’ P.T.Usha continues to be an inspiration for every women athlete. 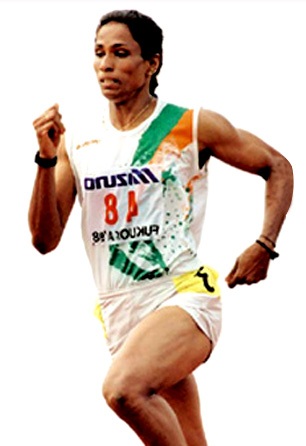 Blessed with a level head and lightening feet, India’s ‘Golden Girl’ P. T. Usha continues to be an inspiration for every women athlete.

Born in Kerala, Usha’s innate talent on the track was noticed since her school days. She trained vigorously under the guidance of her coach O. M. Nambiar and went on to become the first Indian woman to reach the final of an Olympic event at the age of twenty.

She continued to win accolades in several other international events such as the Asian Track and Field Championships, Seoul Asian Games and Beijing Asian Games among several others. She was awarded the Arjuna Award in 1983 and the Padma Shree in 1985. She was also named as the Sports Person of the Century and the Sports Woman of the Millennium by the Indian Olympic Association.

After proving her mettle and making India proud of her achievements, she retired in 2000. But still she continues to encourage and nurture local athletic talent through the Usha School Of Athletics, which is envisioned to be a premier training institute for young athletes.

– For proving that hard work and perseverance pays, if only you keep at it