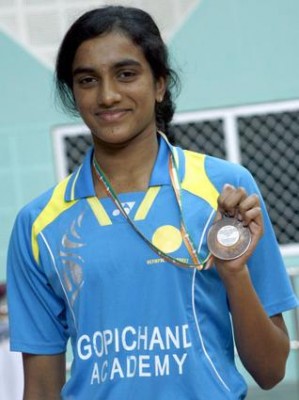 At 18, P.V.Sindhu has deservedly won a position among the top 10 in the Badminton World Federation rankings for women’s singles.

The daughter of two star volleyball players, Sindhu took up badminton at a very young age, inspired by Pullela Gopichand. Due to her constant and consistent efforts, Sindhu has gradually improved her game and has eventually proved her skill in badminton, making us all proud.

Sindhu has won several important international and national championships already, over the course of her relatively short career so far. Although she recently lost to Saina Nehwal in the Indian Badminton League, nevertheless, there is no doubt that the gifted Sindhu is indeed the next rising star to watch out for in Indian women’s badminton.

Sindhu’s fighting spirit, hard work and the willingness to learn will stand her in good stead and will take her a long way in her chosen sport, and in life itself.

– For impressing us with her talent and attitude.

– For the dedication she shows to her game.

– For being a role model to the young girls of today.