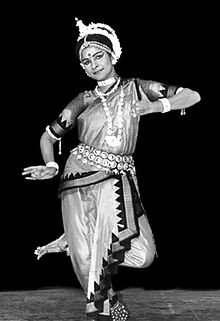 Sanjukta Panigrahi, the legendary Odissi danseuse, restored to a forgotten art form, the status of an exalted classical dance.

Born in Berhampur, Orissa, Sanjukta began training at the tender age of four. A gifted child, her passion for dance was such that she had to be begged to come offstage after a performance. At nine years, she won the first prize in International Children’s Film Festival.

Sanjukta made it her life’s mission to popularize the Odissi dance. Among her sterling efforts was the adroit choreography of dance ballets with versatile, non-conventional subjects like the Bhakti poetry and Tagore’s works as their theme. As was her endeavour to systematize the Odissi, root it in tradition and establish it as a genre in its own right. Sanjukta’s own performance was imbued by an intense spirituality and impeccable grace.

For her pioneering contribution to the Odissi dance, Sanjukta was awarded the Padma Shri and Sangeet Natak Akademi Award. Sadly, her phenomenal life was cut short by cancer. She was only 53.

– Because her dedication towards her art was unsurpassable

– Because in spite of several personal struggles, she did not lose sight of her life’s calling

– Because with all the fame and accolades, she remained a grounded and empathetic human being