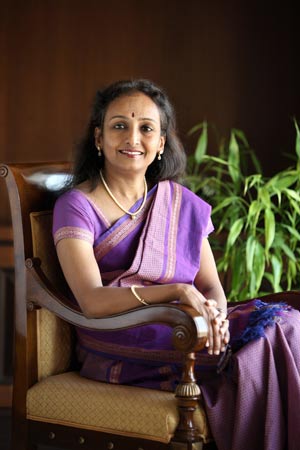 Often referred to as the “mother of private equities” in India, Renuka Ramnath is the Founder and CEO of Multiples Alternate Asset Management.

Renuka Ramnath is a veteran in private equity. She started her financial career in ICICI in 1986 and she continued to steadily climb the corporate ladder for the next 23 years. Being a young single mother of two, Ramnath had to juggle her work responsibilities with her parenting duties. However, she did not let her challenges deter her from her dreams. Under her leadership, ICICI bank’s private equity arm, ICICI Venture, went from being a below $100 million proprietary fund to managing funds over $2 billion, making it one of India’s largest private equity firm.

In 2009, Ramnath quit ICICI to begin her entrepreneurial journey with Multiples Alternate Asset Management. Her impressive track record, extensive experience and superior networking skills helped raise funds for her new company – in less than a year, she managed to mobilise $350 million.

Today, Ramnath has carved a niche for herself in the private equity market. She has often been recognized as one of the most influential women in Indian business, earning a spot on Fortune India’s 50 Most Powerful Women In Business list as well as a place on Business Today’s list of most powerful Indian businesswomen.

– For her remarkable success through hard work in an industry which was once a male bastion.

– For having the guts to branch out on her own when she felt that she had hit a glass ceiling.

– For not letting the challenges in her personal life hinder her professional progress.

Saving For Your Child’s Education

If You’re Feeling Low Today, 20 y.o. Saloni Gaur AKA Nazma Aapi Telling Her Story Will Cheer You Up!