Despite being in her eighties now, writer-activist Mahasweta Devi continues to speak for the rights of the dispossessed, especially the tribal peoples of West Bengal and Bihar. 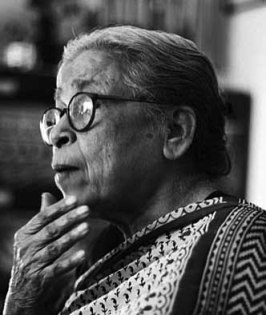 Despite being in her eighties now, writer-activist Mahasweta Devi continues to speak for the rights of the dispossessed, especially the tribal peoples of West Bengal and Bihar.

If one were to detail the awards and honours bestowed upon noted writer Mahasweta Devi, it might be easier to note the ones that she has not received. A prolific writer, Mahasweta Devi’s oeuvre includes such gems as Hazaar Chaurashir Ma,  Draupadi and Rudali. Nor is her writing restricted to one genre – her recent work for Tulika, The Why-Why Girl has been very well-received among an entirely different audience – children.

Common to all her work is a strong strain of empathy for the dispossessed, an understanding of Indian society in its many grey shades and a demand that we, the readers, grow up to respect those different from us – whether by age, class, caste or gender. Besides fiction, Mahasweta Devi has written extensively on the discrimination faced by tribal peoples, including apathy and aggression from the State itself.

– Because she uses her words so effectively