Reckoned as the grand dame of Hindi literature, Krishna Sobti confronts the preserves of patriarchy with sparkling honesty and empathy. 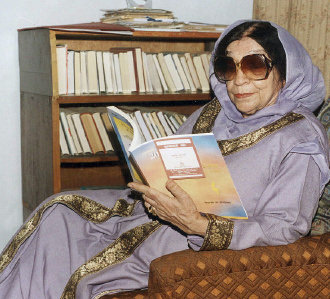 Reckoned as the grand dame of Hindi literature, Krishna Sobti confronts the preserves of patriarchy with sparkling honesty and empathy.

Krishna Sobti won the Sahitya Akademi award for Zindaginama – a novel set in the feudal Punjab of the pre-Partition days. She was also conferred the first Katha Chudamani Award in 1999 for Lifetime Literary Achievement.

Realism and humanism throb in equal measure in Krishna Sobti’s works. We also find in her essays and fiction the usage of a terse personal idiom that makes the author a challenge for anyone to emulate. Even translate.

Krishna Sobti is active even today from her Delhi home, proving that there is no such thing called intellectual retirement.

– Because, she is fiercely protective of her space – both as a writer and an individual

– Because in articulating provocative issues, she yanks society out of its comfort zones

– Because in declining a national award, she demonstrates that inner sanction is greater than institutional recognition

A total commitment to writing