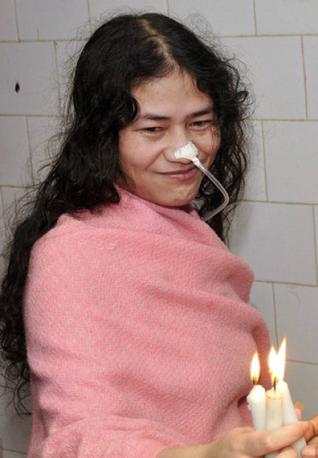 Fasting for over a decade, Irom Sharmila has been fighting for her people of Manipur with silent resilience and sheer determination.

In November 2000, 10 civilians were allegedly shot dead in Malom, Manipur. Known as the Malom Massacre, this tragic incident was the trigger that forced Sharmila to embark on a non-violent fast, demanding the Indian government to repeal the Armed Forces (Special Powers) Act – AFSPA. The AFSPA allows the Army to use force, shoot or arrest anyone without a warrant on mere suspicions. Many feel that instead of controlling insurgent groups as it was meant to, the act has instead victimized innocent civilians.

Known as the Iron Lady of Manipur, Sharmila has been fasting for more than a decade for her cause. While other activists and politicians who go on fasts are immediately attended to, strangely Sharmila’s appeals have made an excruciating slow progress indeed. Arrested every year under charges of attempted suicide, Sharmila is force-fed through a nasal tube. Years of fasting has led to a severe weakening of her body and deterioration of her health.

Sharmila has been conferred with several awards including the Rabindranath Tagore Memorial Peace Prize. But whether she will be able to end her fast on a victorious note remains to be seen.

– When we find it difficult to skip even one meal a day, Sharmila has not eaten anything for more than 11 years. Need we say anything more to demonstrate her conviction?

– For willing to sacrifice herself for the greater good of society

Interview With Binalakshmi Nepram: Women In The Shadow Of The Gun