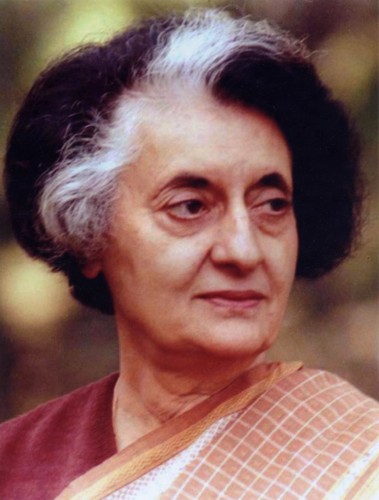 Serving as the Prime Minister of India for 3 consecutive terms, as well as a fourth term, Indira Gandhi evokes images of a strong and determined woman. Born into an affluent and powerful family, Indira Gandhi slowly learnt the ropes of politics from an early age.

Among several progressive schemes, Indira Gandhi is credited with supporting India’s nuclear weapons program which helped establish India as a formidable force. She is also known for boosting the Green Revolution, a program which enabled India to not only become self-sufficient to a large extent in terms of food supply, but also established India’s presence as a major food exporter.

With several hits and a few misses to her name, Operation Blue Star ordered by Indira Gandhi, unfortunately proved tragic for her. The attack on the Golden Temple by the Indian military outraged the Sikhs resulting in the assassination of Indira Gandhi by her own bodyguards, thus proving her prophetic statement, “”If I die a violent death as some fear and a few are plotting, I know the violence will be in the thought and the action of the assassin, not in my dying……!”

– Inspite of representing a relatively new-born democracy, she tackled the world’s super powers with her no-nonsense attitude