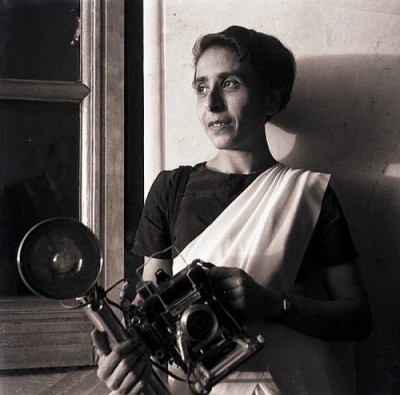 Homai Vyarawalla has the distinction of being the first woman photojournalist India ever had. The choice of photography as a vocation must have certainly raised eyebrows in the 1930s – a time when ‘work’ was a men-only bastion; photography, a rich man’s hobby; and Homai, the only woman photographer in the midst of an all male syndicate.

But Homai was never the one to be ruffled by societal constraints. Her stellar work for the Illustrated Weekly of India during World War II got her recognition. Soon, she moved to Delhi, where she turned official press photographer for India’s political luminaries until her retirement in the 1970s.

In transforming the momentary to the momentous through her lens, this feisty camerawoman gave us not just pictures from a bygone past, but a vital sense of our history.

–  Because she had the chutzpah to pursue a ‘different’ profession, one predominated by men even today

–  Because she was willing to risk anything for the perfect picture

–  Because she respected the dignity of her subject, quite unlike the modern, intrusive paparazzi

India through her eyes

The Lady In the Rough Crowd: Archiving India with Homai Vyarawalla