Arundhati Nag is a multilingual south Indian actress and thespian who is currently a managing trustee of Ranga Shankara. 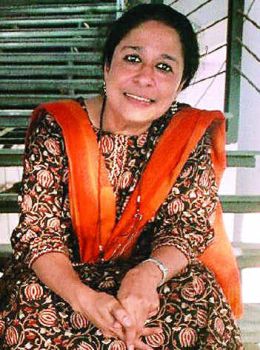 Arundhati Nag is a multilingual south Indian actress and thespian who is currently a managing trustee of Ranga Shankara.

She was born in Delhi, brought up in Mumbai and later moved to Bangalore after her marriage with Shankar Nag, the famous actor and director. She is a managing trustee of Ranga Shankara, a popular theatre group in Bangalore which was founded by the Sanket trust. Her entry into theatre started about thirty years ago with the Indian People’s Theatre Association in Mumbai. Her greatness lies in the fact that she performed in about forty two shows in Marathi, Guajarati, Hindi and English even as a teenager!

Even twenty two years after the tragic demise of her husband she still continues to brim with passion and enthusiasm for the theatrical arts and languages. She can be called a true linguist; she admitted to getting highs while speaking different languages in one of her interviews!

Arundhati has several awards to her credit too. She won the National Film Award for the Best Supporting Actress in the movie Paa in 2010, the Sangeet Natak Akademy Award in 2008, the ‘Citizen Extraordinaire’ award by the Rotary club, Bangalore in 2006 to name a few.

– For keeping her theatrical passion alive even after such a terrible personal tragedy of losing her beloved partner.

– For being such a lover of languages.

– For being instrumental in founding Ranga Shankara

– For giving such bright and lovely smiles that are so reassuring and kind.