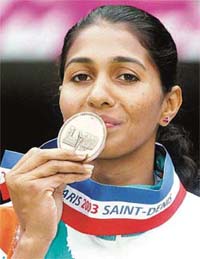 Anju Bobby George’s father introduced her into the world of athletics and her trainer helped polish it further. She was first noticed at the national school games, where she bagged the third place in the 100 meter hurdles and the 4×100 m relay.

Having kicked off her interest with Heptathlon, she soon started turning to jumps and went on to win the 1996 Delhi Junior Asian Championships for long jump and in 1999, she set a national record for triple jump at the Bangalore Federation Cup.

She picked up a silver medal at the South Asian Federation Games in 1999. Since then, there has been no looking back for Anju, who went on a strict practicing regime to strengthen her stamina and her chances of winning a medal for the country.

The year 2001 was the best for her as she won a gold medal for triple jump at the Ludhiana National Games and broke her own record at the National Circuit Meet at Thiruvananthapuram. The succeeding year, she won a bronze at the Commonwealth Games, the only Indian woman and athlete to have won a medal.

Awarded with the Arjuna award in the year 2003, Anju still strives to reach her personal acme.

– Her determination and will to succeed. Anju started practicing within a month of her delivery