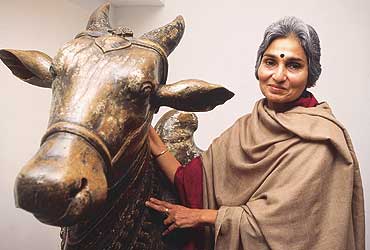 Amrita Patel, chairperson of the National Dairy Development Board has given the dairy industry in India a commendable boost.

Giving women half her age a run for their money, this sexagenarian is a bundle of energy and intelligence. She took it under herself to duly implement Operation Flood that financed and promoted the national cooperative dairy structure in the country, thus providing financial and materialistic aid to a number of small scale, village level operatives and small farmers.

A visionary, she helped concoct and lay the Foundation for Ecological Security, an organization dedicated to restore ecological processes in order to improve the biological productivity of the once-fertile land.

Amrita Patel has received a lot of critical acclaim and was awarded with the Padma Bhushan for her contribution to animal husbandry. She also received the Dr. Norman Borlaug Award for contribution in the field of dairy development as well as the Indira Gandhi Paryavaran Puraskar award. She was named the International Person of the Year in 1997 by the World Dairy Expo. Inc.