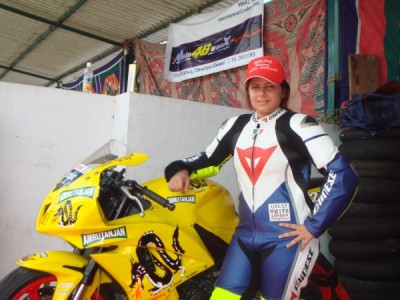 Racing is in Alisha Abdullah’s genes. Her father, RA Abdullah, is a national champion in bike racing. It is no wonder then, that Alisha won the MRF National Go-Karting Championship when she was only 13 years old.

Alisha went on to try her hand at racing cars where she won the Best Novice award. Later, she switched to racing bikes. Alisha believes in breaking gender boundaries and has no qualms about being in a male-dominated sport.

Alisha is always ready for a challenge. In fact, she is said to have boldly stated, “Whenever someone cites the biological factor, fitness can level the differences. I can perform 40 to 50 push-ups at one go. I challenged a guy to it and won. Women stay weak because they are taught to think they will always be weaker than men. They just have to look at the women athletes to know it is a lie.” Alisha’s love for bikes and racing has also given her an exciting job at the prestigious Harley Davidson as the Sales Manager & Consultant in Tamil Nadu.

– For her fearlessness; racing is afterall, quite a risky sport.

– For explosively breaking the myth that women are bad drivers.

– For proving that women can be as capable and as competent as men in any field that they choose to excel in.