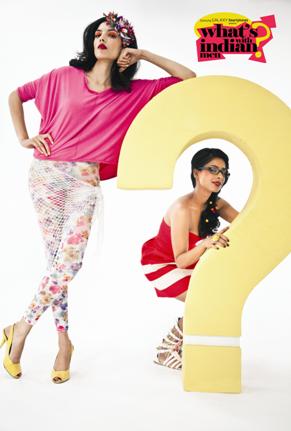 Interview with Indrani Dasgupta and Sugandha Garg, co-hosts of What’s With Indian Men?, a travel show that decodes the man with his city.

Indrani Dasgupta has one of the most famous faces in India – the Lakme girl is in every magazine, on hoardings and television across the country. Sugandha Garg is the young actor who’s a part of New Bollywood, appearing in movies such as Jaane Tu Ya Jaane Na and Tere Bin Laden to name a couple. Together, they host FOX History & Traveller’s original series, What’s With Indian Men, currently airing through July.

Amrita Rajan (AR): How did you come to be involved in What’s With Indian Men?

Indrani Dasgupta (ID): The channel called and asked me if I would be interested in doing the show. This show was different from everything I have been offered on TV. It sounded like a show I would watch, which was the tipping point.

Sugandha Garg (SG): I was approached by the channel to host the show. When I heard the name of the show, I had no doubt that I was doing it! We all want to know ‘What’s With Indian Men’!

AR: Were you involved at all in the production process, specifically in choosing locations and subjects?

SG: The show has been produced by Small Screen and they operate out of Delhi. The production house is in charge of selecting locations and the men we meet, but once on location the process is very collaborative. We usually have a specific question per city that we’d like answered by the men and most often these questions get them talking about other aspects of who they are and what they do.

ID: We – the director [Abhinandan], Sugandha and I – enjoy a great working relationship, where we sat together and discussed ‘our takes’. Some of it is locked in pre-production, and some is ‘we make it up as we go along’. One has more experience in one city over the other, and we used all of that on the show. For example, I am more familiar with Delhi and Kolkata, Sugandha with Mumbai, and so on. None of the conversations were scripted though. What one sees on TV is the edited version of completely impromptu conversations we had with our guests.

AR: What was the most difficult moment shooting this series? Did you have any misgivings going in?

ID: I did. It is my first time on TV. It wasn’t [as] ‘fancy’ as the sets or locations I am used to, coming from fashion and advertising. Plus we shot 30 days on the trot through May and June. The heat was pretty intense.

SG: The heat and not the men might have made this series difficult to shoot at times. We shot in the peak of summer and at times it was unbearable. I personally think that we have just about scratched the surface of What’s With Indian Men and would love to do a more heart to heart interview in winter!

SG: Delhi boys outdid themselves in the humour department! Funniest was seeing Sanjay Rajora (comedian from Delhi) practically having a cardiac arrest at the sight of Ghagaras worth 2 lakhs! And that somebody was going to pay that money and sure as hell it wasn’t going to be the bride!

I also enjoyed being in Guwahati because all my misconceptions of north-east boys being hard core rockers were dispelled…They respect women and I felt safe there.

AR: What was your favorite moment/ episode?

ID: I liked Delhi so far. I have consciously decided to see the rest of the episodes as they get aired with the rest of the viewers. But I think the one on Kolkata will be great too. I am looking forward to that.

SG: I personally loved being in Goa and meeting the men there. There is a calm about them of a life well lived that is very apparent. I also enjoyed being in Guwahati because all my misconceptions of north-east boys being hard core rockers were dispelled. They are very soft spoken and somewhere untouched by a speeding world and continue to live surrounded by nature and all other good things. They respect women and I felt safe there.

AR: Do you feel like you’ve come away at the end of this series having learned something new about Indian men or gender relations in India?

ID: Look, I am not parading or pretending to be any kind of an ‘expert’ as far as the gender issue is concerned. This is primarily a travel show, where the city is the star. And I am still a model who loves doing what I do. We looked to meet a couple of men from every city to see how one shapes the other, and vice versa. Beyond that, men will be men… trying to sound all ‘right’ and asking you out for a drink after the camera stops rolling.

SG: I feel men in India are going through a confused time because at one hand they still want to hold onto older traditions and yet be modern owing to the great extent of exposure via internet, TV etc. I do think I might be speaking for comparatively more upwardly mobile cities and the reality of gender dynamics might be different in more orthodox communities.

AR: You guys have great chemistry but the toughest part of any journey can be the time you spend with your travel partner. What have you learned about each other in this process?

SG: I didn’t know Indrani at all before we started [the] shoot. We have traveled extensively in these past few months and neither of us are girly-girls. That’s why we have managed to put together a good show. We don’t squabble over clothes, make-up etc and are comfortable in our skins. I’m pretty sure that we will be friends even after the show. Amen!

ID: I met Sugandha on the shoot, and luckily for both of us we got along just fine. I was looking to learn and have fun doing this show. That is usually my approach to most things, that it should be fun. If it’s not worth writing home about, then maybe one is better off at home. Second, do the best that you can. Both of us were committed to that 100 percent. It’s been an honest effort. Sugandha has done TV, so she coached me on that, and I gave her tips of the trade for make-up and styling. It worked out well, I think.

AR: Any plans for a sequel? Maybe ‘What’s with Indian Women’? What kind of scenarios would you be interested in exploring in a series like that?

SG: What With Indian Women as opposed to their counterpart, in my humble opinion, will take a lot more than a television series. Besides I don’t think we have exhausted what the men in this country think. In fact, we have just started. I don’t know what the channel thinks but my vote goes to the men for the sequel as well.

ID: I hope so; it would be interesting to see how we could do it differently. Am not sure I am done with men though, there’s definitely more we can do with that.

The basic qualities desired from a man from our previous generation have evolved. Back then you needed a man to provide for you and now it seems to be more about sharing a life together as partners.

AR: What’s your idea of the perfect Indian man? Has it evolved over time?

ID: Perfect Indian man? Wow, am not sure if there is such a thing. I think at the moment [M.S.] Dhoni is up there on my list. But the Indian man does have it rough. He has large shoes to fill and many roles to play, and let’s face it; it’s a pretty thankless job!

SG: Personally, I require my man to be progressive. I feel I’m as much an alpha female and it would require someone very secure to be with me. My husband Raghu [Note: Sugandha is married to Raghu Ram of MTV Roadies fame] is inspiring in this regard. He is the most committed feminist I know! The basic qualities desired from a man from our previous generation have evolved. Back then you needed a man to provide for you and now it seems to be more about sharing a life together as partners.

AR: One of the reasons the title of your show resonates so much is because of the slew of articles that came out just a little while ago about what’s wrong with Indian men. I appreciate that’s not the direction of your show, but I want to ask:

Sugandha, you’re very Gen Now, with a hip and modern vibe. How do you handle harassment?

SG: Well, this happened very recently. I was at the Delhi airport at around 10pm and was walking to the basement where the car was parked. As I was about to enter the car park a guy came out of nowhere and banged into me and continued walking. I screamed at him and asked him to watch where he was going and he turned around and said to me, “Can’t you see a MAN is coming, why don’t you just step aside?” I took a step forward and asked him if he didn’t see “a WOMAN” was coming! For a brief second I was really scared but stood my ground. He mumbled something and left. It’s important to react and at the point of attack. Women rarely enter into physical altercations when they are growing up, whereas most men do – it is a fear we feel when under attack. I think that needs to be addressed. I would have done nothing differently!

AR: Indrani, you’re an absolutely gorgeous supermodel. How do you deal with harassment? Is it true that men are intimidated by a combination of beauty and success?

ID: Firstly, thanks! I will take that! I went to college and did my masters in Delhi, which involved a lot of public transport. So sure, I have been harassed. What has changed is how I tackle it, which I think has come with time and experience. Earlier, I would avoid eye contact, and carry something sharp in my pocket. Now, with time, and success if you please, I am much more confident when something happens, so I look to make a scene, or act totally indifferent. But I continue to keep something sharp in my pocket.

But, I have to admit, it is true that Indian men are intimidated by successful, beautiful women, and I wonder, What’s with Indian Men?!