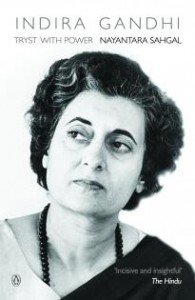 The first thing that strikes the reader about the book is its dedication: John Kenneth Galbraith, in gratitude, a most unlikely recipient of such a revere. Indira Gandhi: Tryst With Power is a story written by a cousin about another cousin who assumed the country’s highest position in office.

As such, the book is replete with opinions that only a close one can afford to give; but it also delights in the vignettes that form an endearing part of what is a critical appraisal of not only Mrs. Gandhi the Prime Minister and one of the most powerful leaders that the country has seen, but also of a lady whom many failed to understand and comprehend.

The book maintains the unique balance of bringing out the person in the lady who dominated Indian politics and gives glimpses into her struggle of trying to emerge from the shadows of an illustrious father. The writing style is engaging, and easy on the eyes. Mrs. Gandhi, the complex persona that she exuded, and her life, would have been a difficult read had the language been arcane.

Nayantara Sahgal is no ordinary cousin of course and has all the right credentials to pen such a story about an authoritative figure. It is an insider’s way of looking at history unfolding. Amongst touching different aspects of Mrs Gandhi’s political career like the riddle about the alleged ballot paper rigging in the 1971 Lok Sabha elections, to lack of clarity in policies, to the emergency, the author manages to cover a wide spectrum.

As an aside, what is fascinating is the account of Nehru recounted by someone who is not only family but also an ardent admirer. His erudition, civility and statesmanship loom large and the writer’s closeness to the great man is evident throughout the book. Mrs. Gandhi tried to remodel her personality on the lines of her illustrious father, who in many ways was an antithesis of what she was. Nehru’s civility and diplomacy even to his detractors earned him respect from every quarter. On the other hand, his daughter bore a flaming personality, steeled and resolved to the point of being cool and truculent to those she did not approve of.

As one reads through, and events unfold, her life is more a tryst with destiny than anything else. She was Destiny’s child chosen to do a job. She had the legacy, the upbringing and a country which was still trying to get on its feet. She was not the best of orators, nor was she blessed with an astute understanding of policy, but what really worked for her was her fearlessness. The economic conditions perhaps allowed for some misadventures, which today would have been unsparing. Did she feel insecure about these shortcomings, and was it one of the reasons she wanted to quash the voice of dissent, at all times?

The legend of Indira Gandhi is borne of her ruthlessness which one day, would also be the cause of untimely and gruesome death. She was known for her steadfast and blind support of her cabinet ministers. It extended to the people that worked as her support staff too and is perhaps what is responsible for the belief that with her started the era of populist politics and leadership cult.

There have been some fine biographies of her in the market, the one written by Katherine Frank and the other by Pupul Jayakar. Both these books have taken a more detailed approach, with popular photographs and memorabilia. Less of a story, more of an account – the way most biographies are. In contrast, this finely written book is a character sketch. It concentrates hard on the subject, almost with a laser-like focus and reasons out actions, always keeping in mind the whys and the hows of this iron lady. Reading the book, one is always hankering to ask, had she not been Nehru’s daughter, would she have been the much feared Mrs G.

Personalities like Indira Gandhi are rare. With many shortcomings, which she chose to address, she reached the pinnacle of a chosen profession and changed the course of history of her countrymen. There have been Prime Ministers after her, more successful in paving the path to success. She perhaps may never be forgotten or forgiven in different ways for her extremities and Nayantara Sahgal does justice in keeping the memories alive.

Her summing up of Mrs Gandhi is perhaps read no better than in these lines:

“She had once listed the four most important influences on her character and thinking as Motilal and Jawaharlal Nehru, Mahatma Gandhi and Rabindranath Tagore. Her genuine yearning towards the vision, humanity and universality of these men may have found fulfillment in another career. The road to power distorted and finally destroyed it.”

If you’re planning to purchase Nayantara Sahgal’s Indira Gandhi: Tryst With Power  do consider buying it through this Women’s Web affiliate link at Flipkart. We get a small share of the proceeds – every little bit will help us continue bringing you the content you like!

Readers outside India can purchase Indira Gandhi: Tryst With Power through our affiliate link at Amazon.