Traditional midwives if supported with modern training can make a significant difference to maternal health in India. 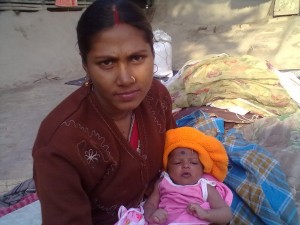 Traditional midwives if supported with modern training can make a significant difference to maternal health in India.

It was a dark night on 31 December 2011 when our youth were celebrating their New Year’s eve with light and music. Meanwhile, an expectant mother Bina Gyan in Jamespur, a remote village of the Sundarban in West Bengal was eagerly awaiting her delivery. There was no doctor, no nurse, nor any hospital nearby. Bina was suffering from labour pains, with the village midwife and elderly women of her house for company.

A Royal Bengal tiger had wandered into the village from the adjacent jungle just a couple of days ago, and the whole village was gripped with fear.In this situation, who would take the risk of carrying her to the primary health centre across the river by a narrow boat?

Although Bina’s baby was in a complicated breech position, she gave birth to her baby girl successfully with the help of the experienced village midwife. A day later, Bina and her newborn baby (in pic) were examined by a team of doctors at a nearby medical camp. Surprisingly, they gave the same advice for her lower abdominal pain as her midwife and grandmother had!

Traditional midwifery being pushed into oblivion

Yes,this is a true story of not only Jamespur but the rest of rural India as well – where the village midwife is a true blessing in disguise. Unfortunately, in the name of modern medicine, we tend to overlook and neglect them. We are not aware of the history of midwifery in our country. The two eminent physicians of ancient India,Charaka and Sushruta have described this vividly in their books and the profession was considered a noble one in earlier times.

During the colonial period when Western medicine gained prominence, our midwives began to face a struggle for existence. They have lost their voices and social positions and yet continue to silently serve the expectant mother and child in these remote villages even today. We can`t see their tears or feel their pain; what we see is only their graceful smiles after saving the lives of the mother and the child, in a complicated delivery like Bina’s.

What do they expect from us? Nothing but a little respect – which we often forget and at times hurt them by using abusive words like ‘uneducated’ and `illiterate’ to describe them without knowing their skill.

They have lost their voices and social positions and yet continue to silently serve the expectant mother and child in remote villages even today.

Need of the hour: A harmonious blend of modern medicine and traditional skills

Bina’s story reminds me of my sister-in-law’s delivery 36 years back. It too was a breech position delivery and the doctor averse to taking the risk of a normal delivery operated her. Unfortunately several complications arose after the delivery. So how can one justify it? As far as I have seen, the work of village midwives is amazing. If we blend some sort of modern midwifery training with their experience they can do wonders. At one point, the government did provide them with training and helped them find work in primary health centres. But now the situation has completely changed. Of late, such training programs as well as their minimum salary have been stopped. So, we decided to train the midwives of Jamespur on behalf of an NGO, Sunderban Simanta Swasthya Pariseva along with a volunteer doctor`s organization Sromojivi Swastha Uddyog (Chengail). Since the entire Sunderban area has no electricity, another NGO, FREED who work for the development of rural Bengali women, have presented us with solar lamps for medical purposes.

With the current emphasis on women empowerment, one cannot help but be surprised to see the progressiveness of the women of Jamespur. They need to walk for atleast an hour, through muddy paths – which during the monsoons are infested with crocodiles and snakes – to reach the only Higher Secondary School of their village. The Pathan Khali College of Gosaba is around three hours from their homes. Yet most of them have managed to complete their graduation.

But what attracts me most is that every family loves their girl child. The relationship between a mother and her daughter is remarkable. Rita Mondal, a housewife I know, never allowed her teenaged daughter to cook and always encouraged her to study. Bina and her family welcomed their baby girl very happily, and as for midwives, unlike other districts of Bengal, there is no caste bar to becoming one. It is our duty to encourage the women of Jamespur.