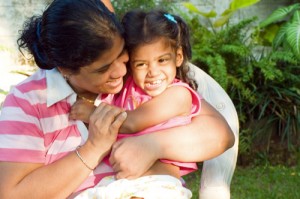 The Importance Of Nurturing Relationships

Nurturing relationships is crucial, says this working mother – whose daughter taught her a lesson that she will never forget!

All relationships, however near or dear, need nurturing!

When my elder daughter was 2 years old, she taught me a lesson of a lifetime.

I was having one of those “high pressure IT project delivery” phases in office, keeping late nights and working weekends. Suddenly my daughter fell sick. It was pretty bad; it took a while for the doctor to realize what was wrong and necessitated multiple tests and trips to the nursing home for drips. After she recovered, she went through a low patch. She was refusing food, started behaving erratically, threw lots of tantrums and every request was met with a “no”. It took almost 3 months for her to get back to normal. During this time she had me worried.

I was puzzled by my child’s behaviour. I often wondered why she was doing this and how long it would continue… I also noticed that she preferred having her food or a change of dress from the maid rather than from me. Why? After all I am her mother and the maid only a paid care-giver. It took me quite a while to realize that it was her small way of “paying back” – avenging my inability as a working mother to give her enough time and attention.

I did not realize that a 2 year old child would think that her mother is neglecting her or does not love her.

Due to work pressures I was unable to give her and our home much time and attention. Whatever time I did manage at home, I would rather rest or look into other household chores. I “assumed” that she would be fine; she would “understand” that mother is busy, mentally not really “present”, too overburdened with work. I did not realize that a 2 year old child would think that her mother is neglecting her or does not love her. When I did realize it, I started being friendly with her, requesting to play games with her, spending as much time with her as possible. It took a whole 3 months of my efforts to get her to “like” me!

My mistake – I took a relationship for “granted”. I did not know that such a close relationship also needs nurturing… all the time!

I have also observed other relationships and experienced some. To sustain relationships over a period of a time, you need to nurture them. Give them your mindshare. Visit people living near you/ in your city occasionally. Phone calls for the “personal touch”, especially on special occasions like birthdays and anniversaries are essential for relatives or friends living in other cities. And from personal experience, always reach out to people in times of bereavement. If you have stood by someone in times of need and sorrow, that means a world to them. Till date I remember clearly all the people who called or came on the day my father passed away. And that was 17 years ago.

To sustain relationships over a period of a time, you need to nurture them.

In the age of social media wired relationships, posting photos and “liking” pictures on Facebook is not enough. The personal touch and the sincerity of your communications matter. Just by potting a plant, don’t expect it to flourish and bear you fruits. It needs the care and nurturing, the regular watering and pruning. Then see it flourish!

Nurture relationships, they will make a world of difference!

About The Author: Barnita De is a Bengali by birth, brought up and educated in Kolkata. Working in Bangalore for the past 12 years she has 2 daughters aged 8 and 4 who are her world. She loves gardening, crafts and cloth work like applique.

7 Lessons I Learnt From My Mother