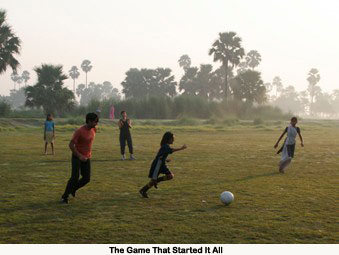 A community in rural Bihar comes together to prevent child marriages and to ensure a brighter future for young women in India.

Just over a year ago I found myself on a football pitch in rural Bihar, kicking a ball around with half a dozen Muslim girls. The early morning mist rose from the surrounding paddy fields and the sun was still low in the sky, framed by the goal-posts.Two of the girls wore full football gear including proper boots and shin-pads. One played in salwar kameez and bare feet. Also playing with us was Mritunjay Tiwari who runs the local eye hospital and Azhar Khan, his second in command.

This impromptu game had come about because I had told Mritunjay that, at home in London, I played football every Sunday morning. It turned out that he, too, was a football fan. He had suggested that we join the local village girls who were very keen. After playing for a couple of hours, I thanked the girls and returned to the eye hospital. Having had the company of bonny girls all morning I was suddenly acutely aware that there were no female employees at the hospital. I remarked on this fact.

Mritunjay explained that this was because girls rarely finished their education in rural Bihar since their families could not afford the government school fees. So they married them off by the age of 15 and most were pregnant by the age of 18. Five months later, I returned to Mastichak, the location of the Akhand Jyoti Eye Hospital and the football pitch. 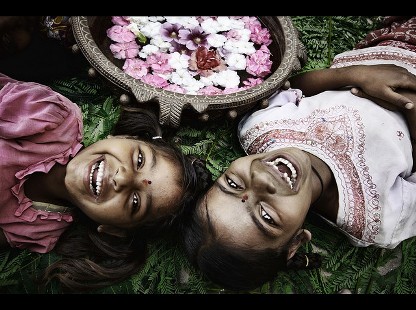 When I went to play football as usual at 6 a.m, I found the village pitch teeming with girls. There were 60 of them, varying in age from 10-18, Muslim girls and Hindu girls from all castes, all dressed in colourful football stripes. They were being put through some rigorous training by coach Madhu Singh, a member of the Indian women’s team and the first woman from Bihar state to become Vice-Captain. Many parents watched. Other villagers carried on with their own routine, guiding their cattle along the side of the grass pitch rather than walking them through the centre in deference to the highly organised football training.

After the training the girls returned to the eye hospital for a nutritious meal and for English and IT classes. I learned that on the days when there was no football training, they attended the local government schools. Their fees were now paid for by the eye hospital. Those girls who complete their schooling can go on to train for a Diploma of Ophthalmic Technicians’ Course after which they have guaranteed jobs at the hospital….unless of course they opt to become professional footballers.

In return for all this, all parents have signed an agreement that they will not get their daughters married until at least the age of 21.

Wow, that’s unbelievable, I am always told by urban women in India with a hint of envy in their voices. Surely there will be a backlash “from the community.” And that, I believe, speaks volumes about how most urban women perceive rural women – through the prism of their own lives.

Understanding the root cause of child marriages

Child marriage in the villages around Mastichak was not rooted in anything worse than Poverty. Most people in rural Bihar live on less than 12 rupees a day. The girls gave us all the idea for a solution with their passion for football.

Then everyone else got involved, from the local Imam to the local mums and dads. Poverty makes one highly pragmatic. And they could all see that there were nothing but winners in this scheme : the girls with their improved health, education and career prospects, their families with the chance of more money coming in as well as an increased awareness and education about their own health via their girls, the hospital with a guarantee of a reliable workforce unlikely to desert to the cities (as young village men sometimes do), and of course the blind patients for whom the Akhand Jyoti Eye Hospital was established. The “community” is all of them.

So, in a small corner of India’s most conservative, illiterate and impoverished state, it took just five months to overturn a tradition stretching back hundreds of years relating to child marriage for girls.

Meanwhile, at about the same time, in Delhi, after 13 years of stalling, and two days of uproar, the Women’s Reservation Bill, finally managed to clear its first political hurdle when the Upper House of India’s Parliament voted in favour. Some of the vitriolic comments I read in the papers from those opposed to giving women better representation in the legislatures were, frankly, breath-taking.

So which is the more ‘progressive’ society? That of educated middle-class Indian women in the urban areas? Or that of the Mastichak footballers? Well, I know whose boots I would rather be in.

As I write this, a crisis is unfolding in the life of Mala K.*a young woman from Chennai, whose parents discovered that their daughter is attracted to other women, not men.

The Goal Girls program aims to reach out and teach life skills for girls through a fun way- netball games!

The Goal Girls program aims to reach out and teach life skills for girls through a fun way- netball games!