Fun Travel For The Senior Citizen

Travel for senior citizens in India is fast catching on - activities for older people are no longer as restricted! 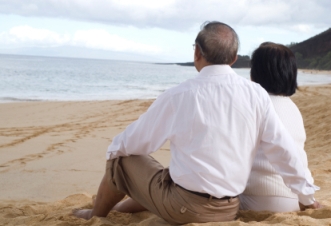 Travel for senior citizens in India is fast catching on – activities for older people are no longer as restricted!

Gone are the times when being a senior citizen in India meant reading the newspaper endlessly; now, it may well mean going for a walk in Central Park, NY or standing on top of the world at the Burj Khalifa Tower, Dubai or even sun bathing in Mauritius! As the cliche goes, the world has become a smaller place and with early retirement plans, increased longevity, improved health conditions not to mention the empty-nest syndrome, an increasing number of older people are taking to travelling – with their children, friends or spouses and sometimes by themselves.

While both domestic and international travel for senior citizens in India has become pretty common, a little extra care needs to be taken to make it comfortable and fun. Firstly, choose places keeping in mind the ailments of elders travelling with you. Heading to completely off-beat decisions with no medical facilities may not be a good idea! Try to do some research on the accommodation offered and ensure that the hotels are clean, accessible and comfortable. If travel insurance is available, do take a policy – you never know when it might come in handy.

The travel options for senior citizens are many, each with their own advantages and disadvantages.

If you are driving, ensure that you stop at regular intervals. Older people might acquire stiffness in their joints due to prolonged sitting and will need an occasional stretch. Further, disorders such as diabetes lead to frequent bathroom visits. Always keep some oil-free and healthy eats or fresh fruits on hand to help them combat any acidity problems due to irregular mealtimes.

Though bus facilities in India have greatly improved in recent years, we still have a long way to go. Bus steps are often high with no hydraulic system to lower and raise them, proving difficult for elders. Also, most Indian buses do not have toilets and will only stop at pre-designated rest areas. If your older companion is prone to motion sickness, especially while travelling in hilly areas, keep a few plastic sick bags handy. Also, offer them a lemon or something tangy to eat.

India’s railway network is pretty extensive with the added advantages of having toilets as well as beds to rest that poor back. To avoid unnecessary stress at the railway station, try to arrive a little earlier than you usually would. Most major stations are crowded and many have overhead footpaths to cross. Older people are not going to be able to rush or climb up and down stairs as easily as you.

Avoid strain on the sensitive digestive system of elders and try to pack some simple, no-mess meals such as parathas or lemon rice.

Apart from a few trains such as the Shatabdi Express, the food quality on trains is poor. Avoid strain on the sensitive digestive system of elders and try to pack some simple, no-mess meals such as parathas or lemon rice. Load your Ipod or MP3 player with their favourite music (whether it’s bhajans and golden oldies or a bit of Rock!) to occupy them. A couple of books that they like to read will also be useful to pass time. Try to book lower berths for them as they would find it difficult to climb onto the other berths. Do not keep them awake by sitting on their berths and chatting away into the night. Let them get their much needed rest.

Travelling by ship or boat is not very common, but with the rising popularity of cruises, it is worth mentioning; if you opt for this, keep in mind that it may take a couple of days to get used to the rising and falling motion of the waves especially if the weather is rough and the waters choppy. Usually a doctor is onboard on long cruises- but do take a few precautions to keep sea-sickness at bay.

On a recent flight from Chennai to Dubai, an elderly couple from a small town in Tamil Nadu was seated next to me. It was their first flight and they had to be helped with everything starting from seat belts to the reclining seats to food trays. It did not help that the air hostesses on board did not speak the local language. The poor lady next to me was unaware that there were toilets in the plane and wondered about that to me almost at the end of the journey – upon which I pointed out the toilet to her. Thank goodness the flight was a short one-imagine her fate if she had been on a transatlantic one! One of my elderly neighbours actually thought that one could use the restroom only when the plane is over water! It might seem funny but it also shows the problems that a lack of awareness creates.

One of my elderly neighbours actually thought that one could use the restroom only when the plane is over water! It might seem funny but it also shows the problems that a lack of awareness creates.

Spare a few moments of your time to explain to your elderly companions the dos and don’ts especially if they haven’t flown before. They will feel involved and understand what is happening instead of simply following you blindly. I

If you have an older person seated near you, you could ask them their preference of seats-usually the preferred ones are the aisle seats as it enables them to get up to visit the loo or take a walk easily without disturbing others. But some people might have difficulty in getting up often and would prefer to remain undisturbed in their window seats. When covering a long distance, try to choose a route with a break in-between.

As with train travel, arrive at the airport well in time to complete all the formalities. Most airports have buggies or free wheelchairs to ferry the elderly. Airlines usually call for passengers travelling with elderly people to board first-this gives you ample time to seat and settle them down comfortably. While alighting, wait till others get down, so that you can take your time and help the elders out without being rushed by others.

Reduced oxygen levels and increased cabin pressures can cause respiratory problems especially in people already suffering from asthma. Oxygen tanks are not allowed on board flights due to potential combustion/explosion risks. Consult your family doctor and take necessary precautions as suggested. Remember to keep medications in your hand luggage and always have the full prescription handy. Otherwise the medications might be seized by security officials. Also, take enough medicines to last for the whole trip as sometimes they might be unavailable or present under a different name at your destination, which is unfamiliar to you.

Lack of moisture inside the plane can lead to uncomfortably dry, itchy, flaky skin and chapped lips. Keep a small bottle of moisturizer and a lip balm easily accessible. Remind elders to keep themselves hydrated by drinking plenty of water.

Sitting for long hours in flights leads to a risk of thrombosis. To avoid this, encourage elders to take an occasional walk in the flight. Though blankets may be provided in the flight, always carry a spare one as the air conditioning on international flights tends to become colder as time progresses. If individual in-flight entertainment is available, teach them to operate it or choose a movie that they might enjoy and play it for them.

If your elderly companion has any health conditions to be considered, it is advisable to pre-order a special meal (such as a diabetic meal) that many airlines offer.

Keep in mind the climatic conditions at your destination- in Chennai in December, a light shawl would be more than enough but when you land in London you might be greeted with snow storms! Remind them to dress appropriately and keep coats or jackets handy.

Meeting new people, experiencing different cultures or even embarking on pilgrimages are attractive to the older generation who might have missed out on such opportunities due to their earlier commitments. A little effort, patience, consideration and planning from your side, surely goes a long way in making their vacations pleasant and fulfilling.