In our first Friendship Story for August’s ‘As You Write It’, Natasha shares fond memories of her faithful childhood friend. 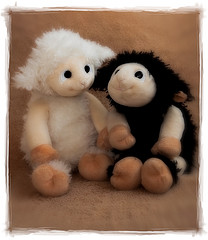 In our first Friendship Story for August’s ‘As You Write It’, Natasha shares fond memories of her faithful childhood friend.

Natasha Ramarathnam, in her own words: A mother of two primary school kids, who has been working in the non-profit sector for over a decade. In my spare time – of which I wish I had plenty – I train for marathons, take photographs, and indulge in my passion for the written word.

I met her at my second birthday party. Preoccupied with my frilly dress, the beautifully iced cake, and the gifts heaped on the side table, I am not sure I even acknowledged her presence. But over the next couple of weeks, I got to know her better, and ­by the end of the year, we were virtually inseparable.

Toto was the best friend anyone could hope to have. She was the friend that everyone should have. Though not much older than I was, she was always there for me. When I was upset about anything, she let me sob on her shoulder and stayed with me till I started to make sense of what was happening. She was the first person I rushed to whenever I had anything to share, and she was always more excited about my achievements than even I was.

She was undemanding. When I wanted to play, she played with me. When I wanted to sit on the branch of a tree and read a book, she sat next to me and watched me read. When I learnt to ride a bicycle, she never pestered me to give her rides, but when I invited her along, she very happily perched on the back-seat and enjoyed the feel of the wind whipping through her hair.

Once, when I fell terribly ill, she sneaked into the hospital on the second day, and refused to leave my side till I was discharged a week later. It must have been as traumatic an experience for her as it had been for me, but I know I would never have survived that week had she not been around.

As I grew older, my dependence on her decreased. Despite having spent her entire childhood and youth with me, she accepted it with a grace that all should aspire to but few possess. By the time I went off to hostel for my post graduate studies, she was virtually out of my life. We kept in touch, but we both knew that she would never be the focus of my existence as she had once been.

We meet every time I visit my mother. And strangely, our friendship is such that we can always pick up the threads where we last left off.

Toto’s more than just a little raggedy now. All her fur’s been rubbed off. She’s sporting so many patches, I can barely make out the original cloth any more. Her pretty red nose has been replaced by a red button. But as long as she is around, she will remain the best friend that anyone could hope to have.