In honour of Father’s Day: Ashok Banker, Author of the Ramayana and Krishna Coriolis series, talks about parenting and what fatherhood means to him. 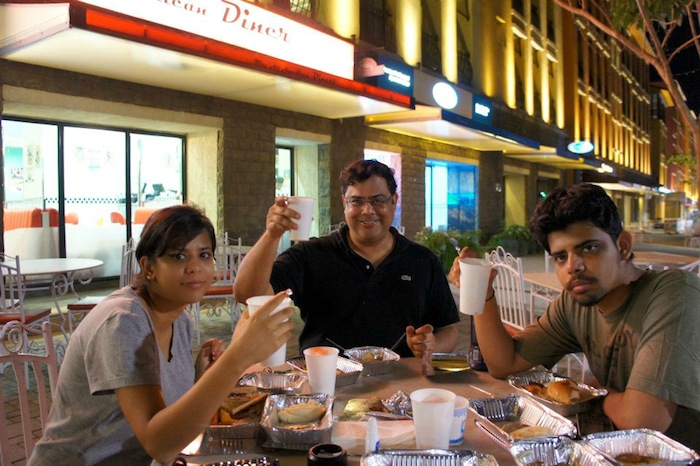 In honour of Father’s Day: Ashok Banker, Author of the Ramayana and Krishna Coriolis series, talks about parenting and what fatherhood means to him.

Ashok Banker was 17 when he met Bithika Jain, 18, a fellow student at the same junior college. She proposed to him and they have been together for over 3 decades. They live together in Mumbai with their son, Ayush, age 23, and daughter Yashka, age 19. As Ashok works from home and Bithika only works part-time occasionally by choice, they spend a great deal of time together and are a very close family and good friends to one another as well.

Give us a single word/line that encapsulates what fatherhood means to you.

Fatherhood is what defines me, even more than being a man or an author.

Are you a different father today than what your father was? How? In what ways are you similar?

Completely, radically different. This is not easy to admit but my father was only my biological father in that he and my mother were married for 3 short months. She then returned home pregnant to her mother’s house and my mother and grandmother raised me.

I only saw my father occasionally over the years, he refused to support me or my mother, even during illness or emergencies – he wouldn’t even pay for my tuition fees or schoolbooks, forcing me to start working at the age of 15 and eventually to drop out of college to work full-time. He was a philanderer and prided himself on sleeping with as many women as possible, spending all his money on them and on rich food, good living and flaunting all this while my mother and I scrabbled for survival.

As a child, I remember him taking me to movies and eating an entire Cadbury’s chocolate but not buying me one because, he said, it wasn’t good for children. The idea of sharing a piece was unthinkable: what was his was his. He was fond of under-age girls, and I recall him taking me out for a weekend when I was 15 – and he proudly told me that the girl he was with at the hotel was younger than me. Later in life, when he fell on bad times, he came to me to borrow money and beg for help.

In a way, having such a man as a father simplified things for me: he was so obviously a terrible father and a bad person that it was far more educational than having a good father with some faults. I remember promising myself at a very young age that I would be a far, far better man than my father was and would work all my life to achieve that.

I quit smoking when my wife conceived our first child, I was with her every step of the way, even in the delivery room for both babies, I was as hands-on through our children’s childhood – perhaps more so, because my wife’s only complaint was that I was “too” involved. I learned to balance that out too and the best way to know what kind of father I’ve been is to speak to Ayush and Yashka and see for yourself: they are far more than our son and daughter. They are wonderful people in their own right. That is how I can gauge that I must have done something right. I am nothing like my father and thank God for it.

How would you describe your fathering style?

Loving. Caring. Nurturing. I believe that competitiveness is the bane of child-rearing today. There’s too much emphasis on achieving. I’ve always believed that success is achievable, but happiness is the only true goal worth achieving.

Bithika and I have never pushed our children to be competitive, to excel, to outdo others: life is always a one-horse journey, not even a race. They’ve done well and not driven themselves crazy as kids do with trying to max entrance exams and become toppers. Ayush is now a Graduate with Honors from Xavier’s, Mumbai, about to leave for the US to do his Masters in Fine Arts (MFA). He only began thinking about a career after he graduated – there was never any pressure from us to decide what to do or when. Yashka decided she’d like to do Law after she gets her BA, and that’s fine with us.

Parenting is supporting. Children are not little duplicates, they’re people with their own minds, aspirations, desires. A parent’s job is to guide and encourage and finally support them to go in the direction they wish to go. Not to push, shove, or derail. Both our kids will be in their late 20s before they think of looking for jobs and probably hit 30 before they are in careers, leave alone think of marriage. In contrast, I was working at 15, married at 23, a father at 25. But they are not me. And that’s the beauty of individuality.

Has fatherhood been as you expected it to be? If no, what was the biggest difference between your expectations and reality?

After the horror story that was my childhood – and believe me, it was a horror story, plain and simple (it’s been written about in the media at length over the years), fatherhood was the most wonderful thing that happened to me. It defined me, made me the person I am. Succeeding as a father has made all that I went through as a child worth the suffering. I felt a great burden to balance my father’s wrongs: to be as good as he was bad.

What is the most important lesson that fatherhood has taught you?