Like hard to put down mystery books? Faithful place is Tana French’s newest contribution to the Dublin Undercover Squad series. 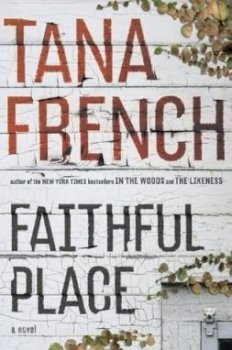 Like hard to put down mystery books? Faithful place is Tana French’s newest contribution to the Dublin Undercover Squad series.

My father once told me that the most important thing every man should know is what he would die for. If you don’t know that, he said, what are you worth? Nothing. You’re not a man at all. I was thirteen, and he was three quarters of the way into a bottle of Gordon’s finest, but hey, good talk. As far as I recall, he was willing to die a) for Ireland b) for his mother, who had been dead for ten years, and c) to get that bitch Maggie Thatcher.

Meet Frank Mackey, cynical cop extraordinaire, and author Tana French’s most recent protagonist. After settling into her niche as a “literary” crime fiction writer with her earlier two novels In the woods and The Likeness, French returns with her latest book Faithful Place. This features yet another character of the Dublin Undercover Squad, her earlier two books having told us about cases with detectives Rob Ryan and Cassie Maddox. Acidic cop Francis Mackey is Cassie and Rob’s boss, and this time, he must deal with murder very close to home and heart.

Frank has nerves of steel; he is the one who directs his operatives in the field, knows when to attack, when to withdraw and when to cut his losses. He is the one who never loses his cool. But when a murder occurs in the Liberties, the neighbourhood where he was born and brought up and sought to escape at the very earliest opportunity, keeping his emotions in check is a very hard thing to do.

Faithful Place is quite unlike French’s earlier books, because although she builds up atmosphere, it is of a very “earthy” nature. In In the woods and The Likeness the story is imbued with eerie, sinister motives and creepy, psychological musings. French’s prose swarms into your head, with her carefully placed red herrings and her surreal, yet sophisticated sounding descriptions of the mind-games people play, in jest and in anger.

Faithful Place by comparison, isn’t located in your head; it is rather, your regular old hellhole on earth. Tarnished by bad memories of a drunkard, violent father, and an oppressive mother, Frank can’t get away from it fast enough, leaving behind his siblings to bear the brunt. French describes it using much Irish slang, and words like ‘shite’, ‘dodgy’, ‘mammy’ and ‘eejit’, and manages to paint it so that we can palpably feel Frank’s emotions.

The central murder, when discovered is already more than twenty years old, but it dredges up long-forgotten animosities and reopens rivalries like fresh flesh wounds. More importantly it forces Frank to return home, and deal with the residual horrors of a traumatic childhood. And when Frank starts nosing around looking for motives, he knows that the killer is probably within hearing distance, watching him and waiting . . .

Like French’s earlier two books, this one is also told in the first person, a technique she seems to have mastery over. This is the second time she writes in a male voice, and she has quite the knack for creating and differentiating individual voices and characters.

This book does not start slow – the murder is out there in the first fifteen pages. We are filled in on the background via various conversations, and thoughts, and Frank’s memories. Even though a murder mystery, Faithful Place does not deal with the workings of the Undercover Squad; rather it has Frank investigating the crime on a personal level, not as a policeman but as a betrayed lover, and potential perpetrator of the crime itself.

Although I can’t say that this is my favourite book by French (that would be The Likeness) this is a strong, tautly spun, suspenseful novel. Faithful Place is another very hard-to-put-down read from this accomplished author.

If you’re planning to purchase Faithful Place by Tana French, do consider buying it through this Women’s Web affiliate link at Flipkart. We get a small share of the proceeds – every little bit will help us continue bringing you the content you like!

Readers outside India can purchase Faithful Place through our affiliate link at Amazon.