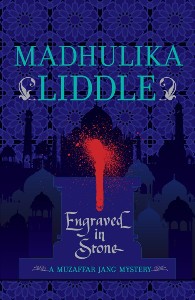 This is not the book for thrill-a-minute murder mystery seekers. Reading Engraved In Stone is an exercise in indulgence; a stroll through the world of Shah Jehan’s Agra, where the Taj Mahal has just been built, with its attendant cattle markets and its loving descriptions of clothes and home furnishing details. That Liddle has thoroughly researched the life and times of the Mughuls has been evident from her first Muzaffar Jang mystery, the Englishman’s Cameo. This is her third story about the young Mughul investigator and it takes him out of his city of Dilli to an Agra thronged with tourists intent on admiring this latest wonderful addition to their world.

Jang, accompanying his sister, is only there by chance but a murder takes place and he is ordered by the Diwan I Kul, the powerful Mir Jumla, to investigate, with dire consequences if he fails to solve the crime by a certain time.

The reader may be so engrossed in Muzaffar Jang and his fashionable friend Akram’s meanderings through Agra that he or she may forget that this is a murder mystery and surrender willingly to the gentle pleasures of history with a hint of romance thrown in. When the murder happens you think, “Oh, this is why I was reading the book!” because unlike most conventional murder mysteries, Liddle’s book does not open with a corpse spattered with blood and gore.

Once the murder takes place, keeping pace with it is a budding romance. The romantically reluctant Jang Sahib has been attracted by a protégée of his sister’s, Shireen, and he realises too that what attracts him is not her beauty – though he has had a glimpse of that through a flying dupatta – but her intelligence which he finds rare in a woman.

Clues delicately appear, taking their time to do so – the difference between the scent of musk and the more humble musk mallow on a perfumed note, for example – and Jang finds himself embroiled in another mystery as well; one which happened a long time ago, the disappearance of a woman who happens to be married to an old stone carver.

Liddle holds up the story for a detailed description of the Taj and another on Mughul building practices, which fans of Mughul architecture will relish but which may ruffle the feathers of readers who are more interested in the murder aspect. Liddle’s polished style though, for the most part, sweeps you through the book.

Despite the fact that she describes herself as a short story writer – the second Muzaffar Jang book was in short story form – Liddle has the requisite grasp of detail and plot to keep a novel going fairly well. She also has to her credit the fact that she has brought a historical detective into the Indian murder mystery genre, thus taking it a step further. Those who enjoy the exploits of Muzaffar Jang will be waiting eagerly for the next in the series to appear.

If you’re planning to purchase Madhulika Liddle’s Engraved In Stone do consider buying it through this Women’s Web affiliate link at Flipkart. We get a small share of the proceeds – every little bit will help us continue bringing you the content you like!

Readers outside India can purchase Engraved In Stone through our affiliate link at Amazon.

The Spy Who Lost Her Head

Travel Souvenir Ideas: Not Made In China