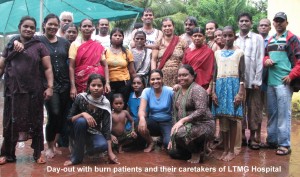 Shirin Juwaley of Palash Foundation, an organisation dedicated to the rehabilitation of people with disfigurement, explains how disfigurement affects the lives of women.

Having a facial disfigurement, according to me, is an advantage! It has sieved out the people in my life as only the significant remain. In the 13 years of surviving an acid attack by my ex-husband, I have come across all sorts of attitudes and behaviours towards a deviant face.

I often wonder why most people cringe, repel, flinch, stare, avert their gaze and feel awkward in their interactions with people with disfigurement. To cite a few examples, Deepa.S*, 25, decided to burn up as she was fed up of living a life not meeting her expectations. This wife and mother of a one year old survived and suffers extreme contractures. Her chin and neck are fused with scarring all over her body. Let’s face it; her physical symmetry has gone askew. This mother prefers to isolate herself in a dingy house with no electricity and water, as fetching food would mean the neighbours cringing and fearfully closing their doors. This means Deepa is willing to go thirsty and hungry rather than step out in a community that is obviously uncomfortable with her physical appearances.

In a country where leprosy is still considered a curse from God, where social discrimination is based on colour, where girls of marriageable age are encouraged to go through great lengths to be visually acceptable, fearing the visually deviant holds no surprise. What is interesting though, is that Deepa herself conforms to these ideas of beauty and finds the reaction of her neighbours justifiable. Many women in the lower socio-economic class resort to burning as an answer to their troubles not realising that this will only add to their woes if they survive. Since fire is considered to be engulfing and easily accessible to women, 80% of burn cases are women and children.

Many women in the lower socio-economic class resort to burning as an answer to their troubles not realising that this will only add to their woes if they survive.

Shanti.K*, 30, was burnt by her in-laws as she was childless three years into her marriage. She survived with her skin on her face and body badly twisted and stretched leaving her looking deviant. She wears a scarf around her facial disfigurement and hides her scars with clothes covering her fully so that ‘others’ are comfortable around her. She runs into a fit of anger if a man passes the comment “Who will be with someone like you? (Teray jaisee kay saath kaun rahega?)” as it affirms that she is not beautiful and hence not acceptable. She has few friends and does not like to socialize, which is much against the carefree person she was before getting burnt. Marriage or even relationships according to her are both impossible and not even a distant dream.

Both Deepa and Shanti are accepting of their discrimination as they don’t know otherwise. The social indoctrination around physical appearances, especially for a woman, starts as soon as she is born. The messages floating around are so strong, be it in the stories we are told, the movies we watch, the clothes we wear, religious significance, customs to be adhered, compliments/comments we receive, comparisons made with siblings and cousins – the list is probably endless, shape our thinking. The visual impact of media has pushed 98% of the ‘normal’ population to ape the 2% population of ‘perfect’ bodies displayed in glossy magazines and hoardings.

For Anamika.M*, who was born congenitally disfigured, growing up with no legs was traumatic. Children around her played and ran while she stood in one place, helpless. She was considered as a ‘kaccha limbu’ /invalid and rejected for not being ‘normal’. The trauma of growing up was magnified, as fitting in became the only goal. Anamika made concentrated efforts to look pretty to compensate for her feet.

The paramount importance given to ideals of physical appearances, mostly for women, has secluded a certain section of society that does not fit into the mould of beauty or ‘normalcy’.

There are thousands of people with disfigurement living in Mumbai alone but the probability of meeting these thousands is reduced to one in a month. I wonder, why is the ratio so abnormally imbalanced? The answers over the years have evolved into more questions. The paramount importance given to ideals of physical appearances, mostly for women, has secluded a certain section of society that does not fit into the mould of beauty or ‘normalcy’. Deviant looking bodies (disfigurement) have been enshrouded with myth, religious beliefs and fear causing disruption in attitudes and behaviour. Disfigurement is defined as an altered physical appearance which can be congenital, due to accidents, burn injuries, surgical intervention, skin deformities, illnesses or any other reason. Hence disfigurement, though not a physical liability, creates a disabling impact due to social prejudices and apathy by society, particularly for a woman, as she is overburdened with expectations of being a perfect (socially acceptable) daughter, a wife and mother.

We at Palash Foundation deal with these core issues of accepting differences. Our core programme addresses social reintegration and livelihoods for people with disfigurement. We currently work along with the social work department of LTMG (Sion) and Kasturba Hospital in Mumbai with burn survivors and their caretakers and simultaneously conduct sensistisation and awareness talks to different groups of people on disfigurement. To know more visit www.palashfoundation.org