Didi, Monobina Gupta’s biography of Mamata Banerjee is a well-rounded portrayal of a paradoxical politician. 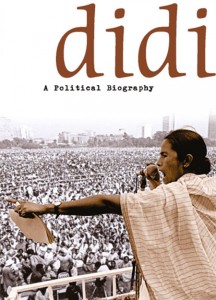 Didi, Monobina Gupta’s biography of Mamata Banerjee is a well-rounded portrayal of a paradoxical politician.

Whatever Mamata Banerjee’s government brings to West Bengal she has found a place for herself in history as the woman who brought down the world’s longest serving communist government. Monobina Gupta’s biography is an incisive analysis of the factors that brought ‘Didi’ – as Mamata Banerjee is fondly referred to by the world at large – to the forefront of power.

Monobina Gupta begins by describing the character of a woman who can be exasperating and magnetic by turns. She points out that Mamata hails from the lower middle classes and therefore is not a bhadralok as many of the top echelons of the CPI-M are. But bhadralok culture in Bengal is on the wane; something that helped Mamata in her rise from the grassroots up. Add to that the fact that, arrogant after 34 years of election walkovers, the CPI-M made mistake after mistake and alienated their loyal following. She also says that Didi, unlike other female politicians in India, made it to the top on her own without the support of any male figure of power – yes, there was Rajiv Gandhi who supported her briefly before his assassination, but that was too brief to have been of any significance.

Gupta painstakingly outlines the landmarks in Mamata’s road to the top – the brutal 1990 attack on Hazra Road that highlighted Didi’s fearlessness in the face of what then seemed indomitable odds gathered to destroy her. Singur, Nandigram and Lalgarh where forcible land acquisition, bullets and manhandling of women went against the ruling party and turned the intellectuals who were the pride of the CPI-M against the Party. Poets and playwrights estranged by an increasingly Big Brother policy that led, on occasion, to the banning of plays, went to swell Mamata’s ranks.

Gupta points out Mamata’s histrionics with her famous black shawl and speaks about the culture of political theatrics – the jatra politician and politician who uses laughter – which gives her an opportunity to compare and contrast Mamata and Lalu Prasad Yadav, who was a follower of the comedic school of politics and who was the Railway Minister before Mamata.

She also emphasizes Didi’s trademark simplicity, that white sari with a ‘thin’ coloured border, the hair pulled back into a bun and the rubber slippers, pointing out that Mamata despite her apparent naivete knew how to manipulate an environment dominated by the media. Where Buddhadeb took a jeep on his political rallies, Mamata walked sweating for kilometers meeting people and shaking hands, realizing perfectly well the ‘blood, sweat and tears’ impression that it would create. Didi was also aware, says Gupta, when it was wise to refrain from interfering, as in the case of Taslima Nasrin who was forced to leave West Bengal after a fracas created by a Muslim minority group and whose book launch was aborted again this year in 2012.

The portrait that emerges of Didi is a well-rounded one. Gupta of course points out that her book went to press as Mamata’s government completed six months in power and there is a long way to go before any definitive pronouncement can be made on the success or failure of the Trinamool triumph. For those who are students of political history and for fans as well as for skeptics this book will throw light on a very paradoxical politician.

If you’re planning to purchase Monobina Gupta’s Didi, do consider buying it through this Women’s Web affiliate link at Flipkart. We get a small share of the proceeds – every little bit will help us continue bringing you the content you like!

Readers outside India can purchase Didi through our affiliate link at Amazon.