Deepika Kumari, 19 year old archer and our inspiring woman of the week, has not had an easy ride in the world of sport. 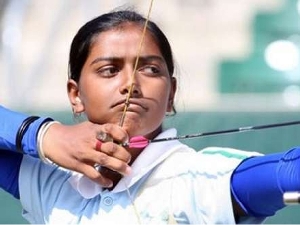 A 19 year old archer, currently ranked No. 2 in the world, Deepika Kumari’s rise in the world of sport has not come easy.

The daughter of an autorickshaw driver, Shivnarayan Mahato and a nurse, Geeta, hailing from Ranchi, Jharkhand, she started her practice with bows and arrows made of bamboo. Scouts from the Seraikela-Kharsawan Archery Academy (run by Meera Munda, wife of the Jharkhand CM Arjun Munda) spotted her raw talent during a visit to her school. Admitted to the academy in 2005, she won a medal in the individual compound event of the junior World Cup at Merida in Mexico in 2006.

She then joined the Tata Archery Academy and won the 11th Youth World Archery Championship in Ogden, USA in 2009 at the age of 15. From then on she never looked back.

She won double gold at Commonwealth Games in 2010, emerging as the biggest archery sensation. She qualified for the 2012 Summer Olympics in London, living an Indian archer’s Olympic dream and  competed in the Women’s Individual and Women’s team events, finishing in eighth place in the latter.

Fittingly, recognition has come her way. She was conferred the Arjuna Award in 2012. On 22 September 2013, she won a Silver Medal in the 2013 FITA Archery World Cup. This was her 3rd Silver medal in as many appearances in the World Cup. She is now aiming for a gold in the 2016 Rio Olympics.

– She believes in staying calm, confident and composed even under pressure.

– For her consistent and gradual improvement, adapting her techniques as she learns from past experience.

– Bringing to the spotlight a sport which not many people know about.